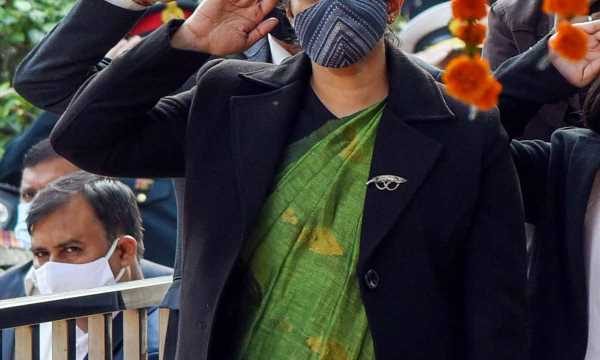 ‘These ladies have sacrificed their husbands so that you can celebrate your birthday parties and anniversaries.’
‘It is your moral duty to treat them right and with respect.’
‘When they visit a bank or a hospital, they should not be made to stand in queue, but treated like Presidents or prime ministers.’

“When a soldier sacrifices his life at the border, he saves hundreds of homes. He pays in blood so that other homes are not destroyed. He prevents many women from becoming widows so that they can live happily ever after with their families,” says Swapnil Pandey, author of The Force Behind the Forces.

The book is a moving account of seven true stories of eternal love, courage and sacrifice of martyrs’ wives.

“The day we army wives step into the military tribe, our soldier husbands tell us the nation will always come first, the men second and family will come third,” says the army wife and author of two previous books in an interview with Rediff.com‘s Archana Masih.

What are some of the difficulties faced by the widows of martyrs? In your interactions with them, what is the sense you have about how we as a people treat them?

The army helps the families and ensures their dues and pensions are disbursed. But once they leave the cantonment, these veer naris (widows of martyrs) face the same societal discrimination and taboos like other widows.

They face the same stigma that a widow in our society faces even today.

The condition worsens in villages and remote tribal areas like what happened in the case Jaya Mahto, the widow of NSG Commando Lance Naik Raj Kumar Mahto who sacrificed his life fighting Lashkar-e-Tayiba terrorists in 2004 in Kashmir.

Three men had died in their family and people of Masu village where she lived branded the widows as witches. She would have been lynched had some army personnel not reached that remote village in time.

She is lucky to be alive and tell her story.

Imagine her husband was a highly trained commando who was part of the NSG’s anti-hijack unit and several other operations, including against the terrorists who attacked Parliament in 2001. He served the nation all his life leaving his wife and two children behind.

And this is what happens to his family.

Is this how we treat a soldier who gave his life for us?

Jaya Mahto went on to obtain MSc and MEd degrees. She teaches science in a government school in Jharkhand. Her elder son works at TCS; her younger son is pursuing a degree in Bachelor of Computer Application. 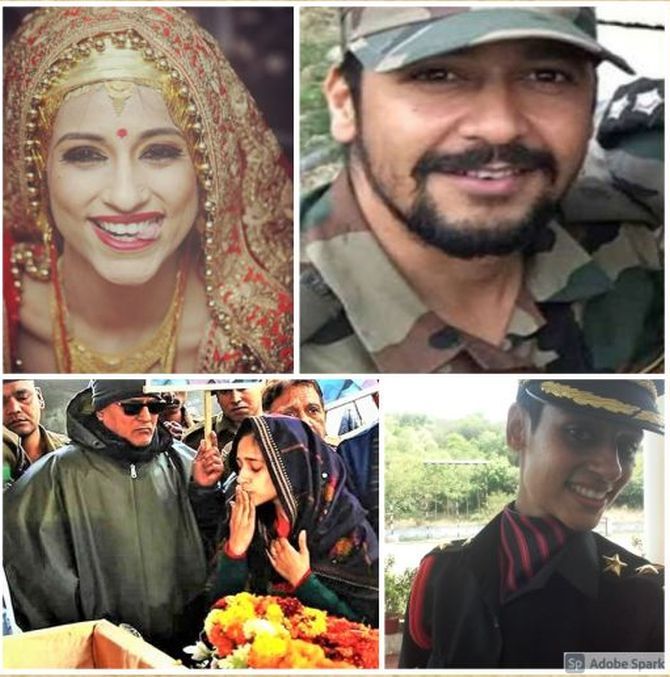 Can you cite some instances of societal discrimination faced by the brave widows that they may have shared with you?

Even today, the situation of young widows in areas like Rajasthan and Haryana is worse.

I came across a veer nari in her 20s from Rajasthan who had a young son. She was confined to one room and had to get up at 4 am so that she could cook and do her daily chores before the rest of the house woke up.

She couldn’t show her face to the rest of the family and would be caged in the dark room till every member of that house went to sleep.

The irony is that they are widows of martyred jawans — everyone around them is living a life of freedom because their husbands sacrificed their lives for them.

There are other taboos especially in remote villages where a veer nari is not invited for weddings or other ceremonies because she is seen as a bad omen.

The situation is not very good in cities either. These ladies get their pensions, but they confront stigma. Every day is a daily struggle.

This societal mindset has to change.

This is a tragedy for a nation. Mrs Damayanti Tambey, wife of Flight Lieutenant Vijay Tambey, Missing-in-Action, 1971 War and President of the War Widows Association — has said in the foreword to your book that the nation needs to do much more for veer nari.s
What more should we be doing?

Mrs Tambey is a lady with immense grit and courage. Her husband has been missing in action for 50 years and she is still looking for him with pride and dignity. She even went to Pakistan.

I also want to mention Mrs Mohini Giri who is the founder chairperson of the War Widows Association. She worked very hard and connected with war widows in villages and towns and found out about their problems in the early 1970s.

There are nearly 25-30,000 veer naris in India. Their soldier husbands have attained martyrdom, but the widows are still with us. Each district has their details.

The government does a lot, but there is still room for improvement.

Veer naris get compensation and pension, but encounter social stigma and discrimination. As a society we certainly can do much more to counter that.

When a soldier sacrifices his life at the border, he saves hundreds of homes. He pays in blood to stop terrorists from entering the country so that other homes are not destroyed.

He prevents many women from becoming widows so that they can live happily ever after with their families.

These ladies have sacrificed their husbands so that you can celebrate your birthday parties and anniversaries. It is your moral duty to treat them right and with respect.

When they visit a bank or a hospital, they should not be made to stand in queue, but treated like Presidents or prime ministers.

These ladies only want to celebrate the lives of their husbands and tell stories of their bravery.

As a society we should be very proactive about honouring them and be inclusive of them. Major Priya Semwal was the first widow of a jawan to join the Indian Army as an officer. She surmounted many challenges to don the uniform. What impressions did you come back with after you met her?

She was my neighbour when I started the story.

When I met her, I saw her in a crisp uniform with stars shining on her shoulder. Men were standing before her and she — as an Indian Army officer — was giving their assignments for the day.

She is an excellent officer.

She did not want to be a bechari. She was highly educated and could have done any other job, but she went on to create history by becoming the first jawan’s wife to become an officer.

Her husband’s unit also helped her very much. The veer naris who have become army officers have been helped tremendously by the units. It is part of the ethos of the unit.

Her brother and mother also helped Priya very much. Her mother is also a widow. Her brother helped her train and travelled with her everywhere.

One common aspect of veer naris becoming officers is the immense and unconditional support from the brothers, fathers and mothers. The wives and children of soldiers bid their final goodbyes with immense grace and dignity as they conceal their own personal grief. What prepares them for this immensely difficult moment in front of an entire nation?

Mrs Lidder, wife of Brigadier L S Lidder who lost his life in the chopper crash in Coonoor, said she is a soldier’s wife.

When Colonel Ashutosh Sharma and Major Anuj sacrificed their lives in Handwara, Mrs Sharma called Mrs Aakriti Sood, the young wife of Major Sood to ask how she was coping.

Mrs Sharma felt it was her duty as an army wife. She said if her husband were here, he would have wanted her to do the same.

The day we army wives step into the military tribe, our soldier husbands tell us the nation will always come first, the men second and family will come third.

Army wives face their loss with dignity and strength because it is their duty as soldiers’ wives.

They are wives of the brave so they have to be brave.