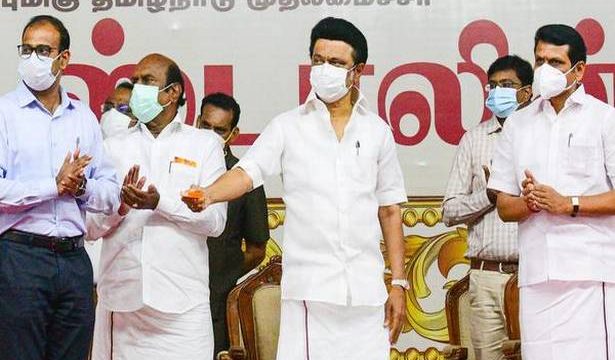 The State Government will completely renew its scheme on women self-help groups (SHGs) to empower women in the State, said Chief Minister M.K. Stalin on Monday.

He was addressing a State Government event, organised on the premises of the Chikkanna Government Arts College in Tiruppur. Noting that former Chief Minister Karunanidhi launched the scheme in 1989, he said women SHGs had been “in ruins” for 10 years under the previous government. In Tiruppur district alone, over 5,400 women SHGs had received loans worth ₹230 crore in the past six months, Mr. Stalin said.

Schemes of the DMK Government, such as free travel for women passengers in city buses and waiving loans taken by women SHGs from cooperative banks, are “an expression of concern that the government has for women”, the Chief Minister said.

“I am sitting on the chair of the Chief Minister as a representative of workers, labourers, farmers, minorities, women, differently abled people and transpersons,” he said, assuring that the DMK Government would continue to function for the next four-and-a-half years in a manner similar to its first six months in power.

The Chief Minister inaugurated 20 construction projects belonging to nine departments, worth ₹28.17 crore; laid the foundation stones for two buildings under the District Rural Development Agency, worth ₹41.24 lakh, and initiated the distribution of welfare assistance to 4,335 beneficiaries, worth ₹55.6 crore.

After the event, Mr. Stalin met garment exporters from Tiruppur and received their petitions. A. Sakthivel, chairman of the Apparel Export Promotion Council, told mediapersons that a request to curb the rise in yarn prices had been made to the Chief Minister during the meeting.

At a function in Coimbatore to inaugurate completed schemes, launch new ones and distribute assistance to beneficiaries, Mr. Stalin said the Tamil Nadu Government’s objective was to make the State number one in industrialisation.

On Tuesday, he will meet industrialists at an investors’ meet in Coimbatore to sign MoUs and draw investments.

The district is known for its industrial houses and medium and small enterprises, and the government’s objective was to industrialise all districts in the State, Mr. Stalin said.

The Chief Minister said his government believed in action more than words.

It did not matter that Coimbatore did not voted for the DMK, as much as expected, he said. Mr. Stalin said he would continue to work for the district’s development.