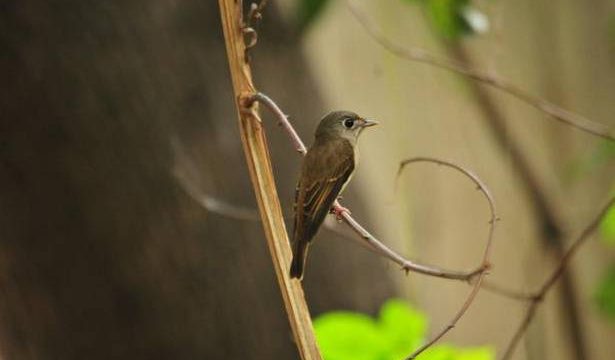 An unusually long spell of rain and the resultant cold weather have delighted birdwatchers in the city with sightings of rare migrant winged visitors in big numbers.

“For the very first time, we recorded the Brown-breasted Flycatcher in end-November in Tiruchi. This small sparrow-like bird travels from the Himalayas and usually spends the winter in Western Ghats, never in the plains. This year, this ‘vagrant’ was spotted in our city,” A. Relton, academic and a birder for over 45 years, told The Hindu.

Among the other unexpected guests he has seen this year include the mottled wood owl, Indian eagle-owl and painted sandgrouse, said Mr. Relton. “Eagles have turned up in good numbers. We have been seeing greater spotted eagle, tawny eagle and booted eagle. It is surprising they chose Tiruchi, because they are all long-distance travellers, coming south during winter from the Himalayas, Ladakh and Kazakhstan,” he said.

Veteran birder and former banker V. S. Velayudan felt that the excessive rain could signal a change in avian behaviour too. “Birds usually come when the water is shallow, because they can pick up shrubs and worms faster. The kind of flooding we saw this year shows a change in environment that could affect both inland and migrant bird population; this needs to examined more closely,” said Mr. Velayudan.

While man-made craters have filled up with rainwater and become new habitats for birds to gather in Tiruchi’s suburbs, many natural spots of earlier vintage are fast disappearing.

“The swampy marsh near the Kudamurutti bridge used to be an excellent place for birdwatching, but real estate development has erased this in recent years,” said Mr. Relton.

Dedicated birdwatchers in the city have hopped online to eBird, a database of ornithological observations providing scientists, researchers and amateur naturalists with real-time data about bird distribution and abundance. “Though we have many good areas for birdwatching in Tiruchi, birding groups are not really networked. Ideally we should do more to get together for birdwatching sessions and record our observations in online databases like eBird, to create a nature archive,” said Mr. Relton.