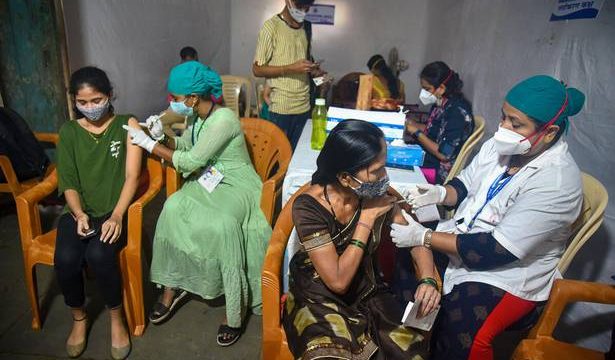 Nevertheless, fatalities continued to be low with 13 deaths taking the cumulative toll to 1,41,639 while 15,351 recoveries were reported in the last 24 hours.

Health Minister Rajesh Tope said the government would be introducing curbs at places of worship and other sites including liquor stores that attract crowds.

Mr. Tope, however, said even as the cases were rising, bed occupancy across hospitals and the oxygen demand remained low.

The government issued a revised order permitting gyms and beauty salons to operate at 50% capacity subject to the use of masks while performing any activity. On Saturday, the government had decreed these establishments to remain completely closed.

As per the Health Department, 207 Omicron infections were reported on Sunday taking the tally thus far to 1,216, of whom 454 have been discharged till now.

Pune district reported a big spike of more than 6,500 new cases of whom 2,800 were from Pune city alone and a single death. The district has 18,875 active cases.

Thane district reported more than 3,800 cases but no fatalities while Nashik district, too, saw a big spike of nearly 4,000 new cases.

The recovery rate dipped incrementally to 94.98%, said authorities. The case positivity rate has increased to 9.8% while the recoveries stand at 65,72,432.