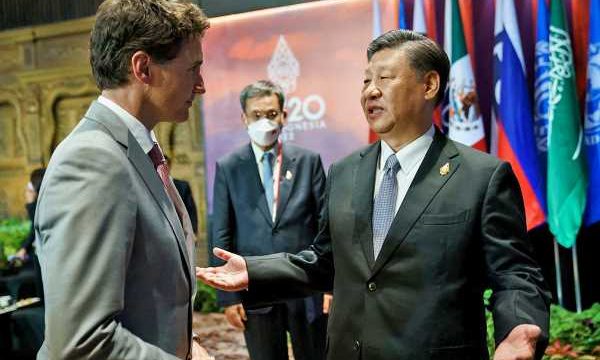 China on Thursday played down what appeared to be a tense conversation between President Xi Jinping and Canadian Prime Minister Justin Trudeau on the sidelines of the G20 summit a day earlier, saying the conversation is “candid, normal” and should not be interpreted as criticism or threat. 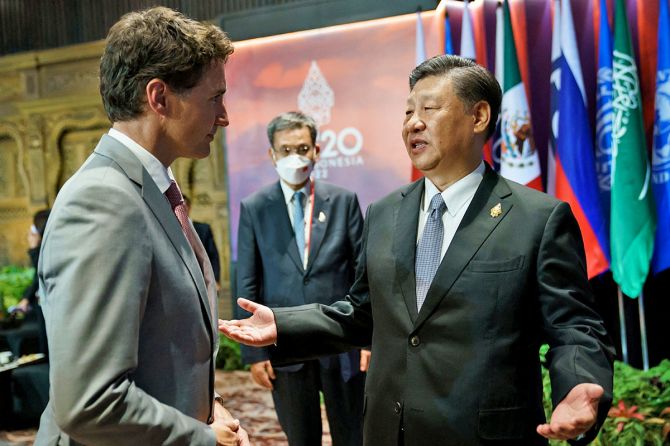 In perhaps a very rare open remark captured on television camera, an agitated Xi was seen objecting to Trudeau for apparently leaking to the media whatever they discussed in their earlier meeting.

As the rare video hit global headlines, the Chinese foreign ministry spokesperson Mao Ning said China has no problem at all with having a candid dialogue with other countries.

”But we hope such a candid dialogue will be based on equal treatment and mutual respect, rather than criticising the other in a condescending manner,” she said, replying to questions on the Xi-Trudeau conversation on the sidelines of the G20 Summit in Bali, Indonesia.

The conversation was ”quite normal and should not be interpreted as President Xi criticising or blaming anyone,” she said.

In his brief meeting with Trudeau in Bali, Xi objected to the Canadian leader saying whatever they discussed in their earlier meeting was leaked to the media.

“Everything we discuss has been leaked to the paper, that’s not appropriate,” Xi told Trudeau through a translator.

“That is not how the conversation was conducted,” he said, adding, “If there is sincerity, we will have a good conversation. Otherwise, the result is hard to say.”

Xi spoke in Chinese, which his official interpreter conveyed in English to Trudeau.

But 50-year-old Trudeau, who looked impatient, interrupted the translator, saying: “We believe in free and open and frank dialogue and that is what we will continue to have. We will continue to look to work constructively together but there will be things we will disagree on.”

For which, 69-year-old Xi said, “Let us create the conditions first,” after which the two shook hands and went their separate ways.

Reports quoted Xi as saying to his accompanying officials ”too naïve” as he moved away.

When asked whether Xi’s remarks to Trudeau that ”otherwise, the result is hard to say” amounts to a threat, spokesperson Mao said: ”I don’t think that that is a threat. It is just normal for the two leaders to talk to each other at the G20 meeting. They are just making their respective positions very clear.”

On allegations that China interfered in Canadian elections, Mao said China doesn’t interfere in the internal affairs of other countries.

”We oppose such behaviour,” she said.

She said in recent years there is a ”clear context” to the course of events in China-Canada ties and the responsibility of which does not lie with the Chinese side.

”Canadian side should follow the spirit of shaping common ground while creating conditions to improve bilateral relations. In this video clip you mentioned the two leaders having talks on the sidelines of the G20, it should not be interpreted as President Xi criticising anyone,” she explained.

When asked whether it will have a damaging impact on the China-Canada ties, she said, ”We hope Canada will take actions to create conditions for the improvement of bilateral ties.”

In the last few weeks, Canada has alleged Chinese interference in Canadian elections by funding 11 federal candidates who ran in the 2019 polls.

Canadian media outlet Global News reported on Wednesday that in their 10-minute conversation Trudeau had raised the issue of the alleged Chinese interference in Canadian elections.

For its part, China has not officially acknowledged the meeting between Xi and Trudeau where the Canadian leader raised the issue of Beijing’s interference in his country’s elections.

Observers say that the unusual conversation between Xi-Trudeau in a way reflects the tense state of ties between the two countries.

For over three years China and Canada had a bitter relationship mainly over the detention of Meng Wanzhou, the high-profile daughter of Chinese telecom giant Huawei by Canadian and US officials, over alleged bank fraud and waged a long legal battle to avert her extradition to the US for trial.

She was finally released from legal detention in September last year by Canada after striking a deal with US prosecutors over the bank fraud case that had kept her in legal limbo for nearly three years.

She was released in exchange of two former Canadian diplomats Michael Spavor, Michael Kovrig and entrepreneur Michael Spavor who were arrested in China in 2018 in a tit-for-tat retaliation to Meng’s arrest.

Meng was given a hero’s welcome when she returned home.