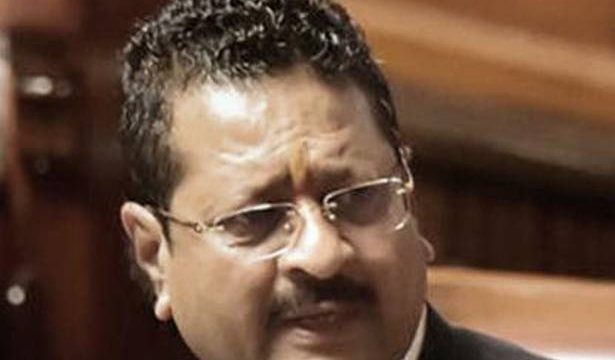 Speaking to presspersons on the sidelines of a programme organised at Veerashaiva Kalyana Mantapa in Kalaburagi on Monday, which was organised for facilitating the leaders of Panchamashali agitation, Mr. Yatnal predicted the imminent fall of Yediyurappa government in the State.

“It is not the BJP government, but the Yediyurappa family that is ruling the State. Mr. Yediyurappa is too old to handle all the affairs. He is a rubber stamp. B.Y. Raghavendra [Mr. Yediyurappa’s son] is handling [government] affairs in Shivamogga and Mariswamy (the CM’s relative) is taking care of Bengaluru. B.Y. Vijayendra [Mr. Yediyurappa’s other son], is looking after the entire affairs of the government in the State interfering in the administration of all the departments. He is the kingpin in the lobby of transfers of government officers across the State. He is the one who is handling all the dealings [of Mr. Yediyurappa]. There is no freedom for the Ministers… When we built the party, Mr. Vijayendra was still at school. If he is everything, why would we need a Chief Minister? The Chief Minister should tender his resignation,” he said.

Referring to the dissent letter by Rural Development and Panchayat Raj Minister K.S. Eshwarappa to the party high command criticising the Chief Minister’s interference in his departmental affairs, Mr. Yatnal said that there were many more leaders waiting to rebel against Mr. Yediyurappa.

“Not just Mr. Eshwarappa, there are many more leaders who would rebel against Mr. Yediyurappa. Some legislators are giving statements justifying Mr. Yediyurappa just to appease him. If the party high command decides to remove Mr. Yediyurappa from Chief Minister’s post, there would be none to support him. The dissent is likely to explode shortly and Mr. Yediyurappa would go home [quitting his Chief Minster’s post]. BJP could not win more than 104 assembly seats in the State under Mr. Yediyurappa. If he is removed, the party would get 150 seats and a leader from North Karnataka would become the Chief Minister. After May 2 [the day of declaration of byelection results], everything would be changed. It is better that Mr. Yediyurappa should respectfully resign [before that],” he added.