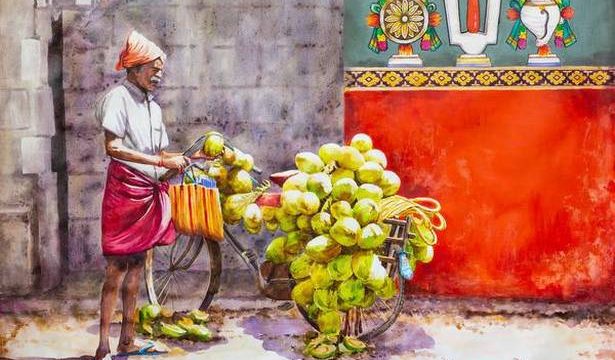 There is far more to a beach destination than surf, sand, sunshine and an unbroken coastline as far as eye can see. Artists Sivabalan and Mohan Naik capture the domestic life of residents and not tourists, in their canvases that are a part of ‘Stories of the Land’.

This virtual exhibition hosted by Bengaluru’s KYNKYNY art gallery and curated by Namu Kini is exhibiting around 14 canvases by each artist. “Everyone cherishes moments of nostalgia where memories fill you with warmth. It is incredible when an artist can evoke that emotion and touch your heart with his work. All artists are trying to tell stories; Mohan Naik and Sivabalan take you back to a simpler time with their work,” says Namu, co-founder of KYNKYNY.com.

Mohan Naik who hails from a farming family in South Goa says his childhood memories are manifested on his canvases. “As a child, I used to be fascinated by shepherds and their flock, but now, that landscape is changing and you hardly see them,” he says. The artist who has used oils and acrylic in this series, says he worked on them for the better part of a year.

Mohan, who graduated from the Goa College of Art, says unlike many of his peers who prefer a Westernised art form, he chose to pursue traditional Indian craftsmanship. “This is reflected in my techniques and figures, which are quite unlike others.” Forest glades and pastoral scenes in pastel shades and earthy tones are the hallmarks of Mohan’s work.

For Sivabalan, his mother’s rangoli (kolam) designs were his first brush with art. “She used a lot of geometrical shapes with contrasting colours and her patterns were different every day. They stood out from the rest of the homes on our street,” says Sivabalan.

With the temple town of Kumbakonam being his hometown, Sivabalan grew up in the hustle and bustle of rural life. “I was observing people in their environment and they fascinated me. I began travelling across South India and started capturing those rare moments that are a part of our culture. That became my signature style,” says Sivabalan, adding, “Just by looking at my paintings, I can easily relive those memories and places.”

Roadside vendors, friendly neighbours and affable strangers, temple elephants and everyday scenes from any small town in India come to life in the bright watercolours that Sivabalan has employed in this series. “Everyone’s idea of rural life is different. By depicting forms rather than faces, I hope to capture those feelings that inspired me to paint.”Starting from ₹ 40,000 to ₹ 3 lakh, canvases from the ‘Stories of the Land’ series will be on display till January 31. Those wishing to view the paintings in person or over a video call can log on to kynkyny.com for more details.