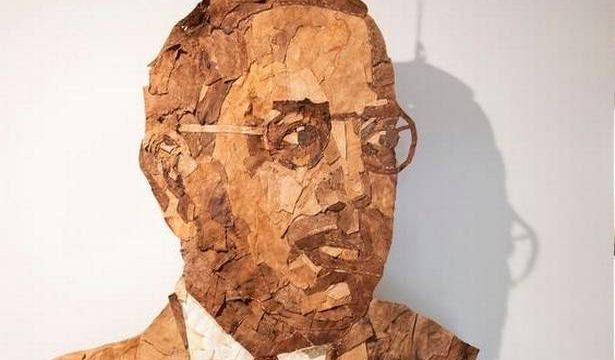 On their residency programme in Banyan Hearts Studios (BHS) in Hyderabad, the duo is exploring identity and the value attached to work

Leather as a medium of expression

Currently pursuing his residency programme at Banyan Hearts Studios, Madhukar is one of the emerging artists to watch out for in Hyderabad’s art firmament. The innate truth in Madhukar’s works emerges not only through his choice of material but also from the issues he addresses. Using leather as a medium of expression, he tells stories that reflect the inequalities around marginalised communities.

Sewing leather which is at the core of his art practice is deeply personal for Madhukar who grew up watching his father make leather products and footwear in his village Nandiwanaparthy near Hyderabad. With leather being at the centre of his ancestors’ occupation, he had pondered, since childhood, on the reality of unequal lives.

After completing his BFA degree from Potti Sriramulu Telugu University, he pursued the MFA from Jawaharlal Nehru Architecture and Fine Arts University (JNAFAU). It was then that his organic interest in art led to a project — for his Masters course — on people who work with leather. “I did some experiments and wondered why not create contemporary works with leather. I hoped to make my art speak for the Dalits,” he says.

An invitation to participate in the Kochi-Muziris Biennale in 2018 helped him find own his cultural identity as he was encouraged to go back to his roots, understand his family history, why and how leather was used by his ancestors and how society treated leather workers as they were traditionally considered impure. He shares the impact: “Knowing my ancestors led me to Dalit history.” His 18 works at BHS, including portraits, give voice to the oppressed people, migrant labour, manual scavengers and social reformers.

Mode of his work

At his workspace, Madhukar has a cane ladder and sheets of leather in different tones, sourced from Chittempad in Telangana. He first draws figures on the floor, spreads leather pieces on it, then climbs the ladder to check the visual. If he is satisfied, he proceeds to cut patterns on leather and stitch them.

He celebrates the lives of Ambedkar and Jyoti Rao Phule with his leather portraits. In the ‘101 kobbarikayalu (coconuts)’ installation, he has used poster glue to create the fibrous white kernel and outer coat in leather. “Politicians often vow to break 101 coconuts to god if they come to power. No matter who wins, the status of the poor doesn’t change,” he says of the work.

Madhukar hopes to go to Baroda to hone his artistic skill. “My father feels proud when he sees me create art with leather. He asks, ‘making footwear is itself tough but how are you able to create such big works?’ It’s a proud moment for me,” he smiles.

With teacher parents, Jayeeta Chatterjee from Kolkata is the first artist in the family. Having done her first residency from Khoj in Delhi, BHS is her second internship. “There is some special connection between wood and me,” says Jayeeta experimenting with nakshi kantha stitching on woodcut print on cloth. Her present works from the Homemaker series began when she lived alone while pursuing her Masters in Baroda. “I was missing my family and experienced loneliness. As I had to manage the chores too, I began valuing the work done by my mother,” she says.

Jayeeta also pondered on the role of a homemaker in the family and began to document homemakers in Baroda. When she went back home, she would document the lives of homemakers living in Bolpur near Santiniketan. “Homemakers work 24/7 but they are not recognised; I want to explore their identity and tell stories through my compositions and stitchings,” she says.

Jayeeta’s main project is to revive the nakshi kantha work, the dying craft of the Bengali traditional stitching technique. She began to research it after learning the technique from the women of Mahadipur, Loharpur and Malda. “The nakshi kantha designs are being used commercially on saris and kurtis but originally these designs were done on a quilt and would take six months to complete depending on the pattern. Soft fabric is a prerequisite for the design. But I found women recycling saris and dhotis to do the designs during weddings.”

After her residency in Hyderabad, Jayeeta plans to continue her creative engagements in Baroda.