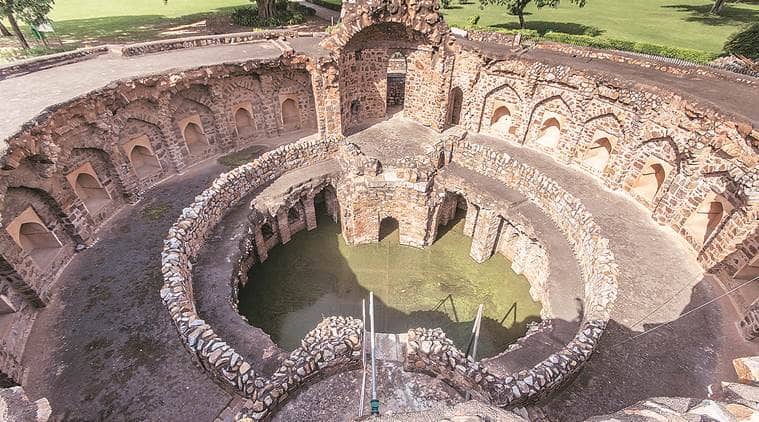 When author and heritage activist Vikramjit Singh Rooprai first came to know about the Munirka Baoli, he took a tour of the entire urban village near Delhi’s Jawaharlal Nehru University, to hunt for it, but could not find any historical structure, except the dilapidated tomb of Malik Munirka. Later, when he checked the land records from 1950s and ’60s, he realised that a part of the village was demolished to make space for the area now known as RK Puram. The baoli of Munirka is now in Sector 5 of the locality and dates back to the Lodhi era. Comprising a few tombs, prayer hall and grave platforms, it makes the Wazirpur Gumbad Complex. It shares walls with a modern-day gurudwara and a temple. Known for his blogs and the heritage walks he conducts, Rooprai mentions the structure in his recently released book Delhi Heritage: Top 10 Baolis (Rs 399, Niyogi Books).

“Baolis became popular after they featured in a few movies. Until then, they were ignored,” says Rooprai. He points out how baolis were once an important part of daily life as they provided water to the neighbouring population. In the book, he mentions how noon time was reserved for women and mornings and evenings for men. A man would never go near a baoli or a tank in the middle of the day. “This shows the amount of respect, discipline and dignity people maintained,” says he.

Rooprai has been exploring heritage structures in Delhi, especially baolis, for over a decade. His first trip was to Rajon ki Baoli, which resides deep inside the Mehrauli Archaeological Park, and was built during the reign of Sikandar Shah Lodhi, followed by Gandhak ki Baoli, also in Mehrauli, which was one of the first stepwells in Delhi, built by Shams-ud-Din Iltutmish for Khwaja Qutb-ud-Din Bakhtiyar Kaki. “Not many knew of Ugrasen ki Baoli till the film PK released. At that time, the only baoli known in Delhi was Hazrat Nizam-ud-din Baoli,” he says. He recalls how when he first saw Dwarka Baoli in 2012, it was a dilapidated pit filled with garbage. “After the media reported about it, government took action, and in the last two years, the baoli has been restored to its present clean state,” he says. For research, he referred to books such as Monuments of Delhi by Maulvi Zafar Hasan, Waqyat-i-Darul-Huqoomat-e-Delhi by Bashir-ud-Din Ahmed, Asar-us-Sanadid by Sir Syed Ahmed Khan, and Delhi — Architectural Remains of the Delhi Sultanate Period by Tatsuro Yamamoto, Matsuo Ara and Tokifusa Tsukinowa, among others. “A huge amount of science and engineering skill was involved in constructing a baoli — from the principle of sedimentation to pressure, many concepts of science are evident. The orientation of each baoli shows that the medieval engineers had mastered the art of keeping the water cool throughout the year,” says Rooprai, who has helped establish The Heritage Photography Club and Heritage Labs in schools, Delhi University and NIFT.

He points out how hundreds of wells and dozens of stepwells were aligned with freshwater streams. “If we recharge them, we can push water to entire Delhi, without having to dig up new tunnels/channels — it is a simple technique that we are no longer using. When the British declared these water structures unhygienic, their usage stopped and they began to be ignored,” says Rooprai. He plans to write three more books in the series — on forts, mosques and monument complexes in Delhi.