Pakistan General Election 2018 Live Updates: Polling begins at 8 am and closes at 6 pm across the 85,000 booths on July 25. The counting will be done on the spot and results will be announced within 24 hours after the polling. Follow LIVE updates for poll predictions and candidates list.

Pakistan General Election 2018 Live Updates: Pakistan will hold its 11th general election since 1970 on Wednesday, in only the second uninterrupted transfer of power from one nominally democratic dispensation to the next. Voting will begin at 8 am at 85,000 polling stations. About 4,00,000 police officers and 371,388 army personnel have been deployed at the booths as a precautionary security measure.

A fierce battle is expected between Imran Khan-led Pakistan Tehreek-e-Insaf (PTI) and Pakistan Muslim League-Nawaz (PMLN) led by Nawaz Sharif’s brother and former Pakistan Punjab Chief Minister Shahbaz Sharif. The third in row is Pakistan Peoples Party (PPP) led by Bilawal Bhutto Zardari, whose support can be crucial in forming a government if none of the parties gets a clear majority.

The high-voltage campaign was marred by violence, including an IS-claimed attack on July 13 that killed nearly 150 people, and dominated by political controversies over the arrest of ousted prime minister Nawaz Sharif. Not one Pakistani prime minister has completed their term yet as the Army has ruled Pakistan directly for 30 years. In an indirect control, the military has exerted force on national security and foreign policy in country’s history.

Pakistan gears up for a tough poll battle Wednesday after incidents of violence marred the campaign process. Follow LIVE UPDATES

Welcome to our LIVE blog. Pakistan goes to poll today. Voting will begin at 8 am at 85,000 polling stations amid tight security. Follow to get the latest updates. 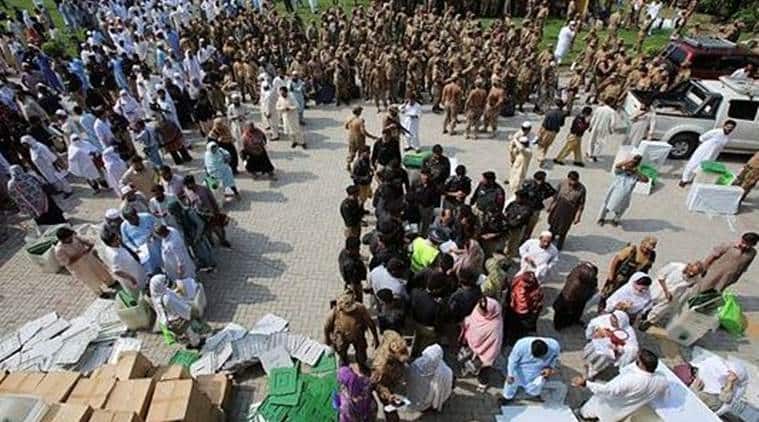 Pakistan Election 2018 Live Updates: The run-up to the elections for 272 general seats of the National Assembly and 577 general seats of the four provincial assemblies – Punjab, Sindh, Khyber Pakhtunkhwa and Balochistan — have seen a massive crackdown on media and allegations that the military was meddling in the poll process. The counting will be done on the spot and results will be announced within 24 hours after the polling.

Also Read | Pakistan elections 2018: Everything you need to know

Also Read | How Pakistan voted through decades of uncertainty

Meanwhile, according to a public opinion survey, which came out on Monday, the PTI slightly ahead of the PMLN. The survey, on the other hand, has also found that 14 per cent of the respondents in Punjab province, the PMLN’s stronghold, remain undecided. And, it is this group of voters who are expected to determine the final outcome of the 2018 elections. According to the nationwide survey, PTI is leading with 29 per cent, followed by PMLN at 25 per cent and Pakistan Peoples Party led by Bilawal Bhutto Zardari at 20 per cent. Pakistan also follows the first-past-the-post system.