Elon Musk's spat with British caver Vernon Unsworth started last week, after rescue teams rejected Musk's offer of a mini-submarine created by his rocket company to help rescue a 12-member soccer team and their coach trapped inside a flooded cave.

Shares of Tesla Inc fell over 3.5 percent on Monday after Chief Executive Elon Musk directed abuse on Twitter at one of the British cavers involved in the rescue of 12 Thai children last week. A number of analysts and investors, requesting anonymity, told Reuters that Musk’s comments were adding to their concerns that his public statements were distracting him from Tesla’s main business of producing electric cars. The stock sell-off knocked almost $2 billion off the company’s market value.

Tesla shares were at $307.20 in after-hours trading on Monday from Friday’s close of $318.87. James Anderson, a partner at Tesla’s fourth-largest shareholder, asset manager Baillie Gifford, called the weekend’s events “a regrettable instance” and said he had reiterated to the company the need for “peace and execution” of its core business.

The billionaire entrepreneur’s spat with British caver Vernon Unsworth started last week, after rescue teams rejected Musk’s offer of a mini-submarine created by his rocket company SpaceX to help rescue a 12-member soccer team and their coach trapped inside a flooded cave in the northern province of Chiang Rai. “He can stick his submarine where it hurts,” CNN quoted Unsworth as saying last week. “It just has absolutely no chance of working.”

Musk shot back on Sunday on Twitter: “We will make one (video) of the mini-sub/pod going all the way to Cave 5 no problemo. Sorry pedo guy, you really did ask for it.” The tweet was later deleted. Tesla spokespeople and lawyers did not respond to emails and phone calls from Reuters requesting comment on Musk’s comments on Twitter. 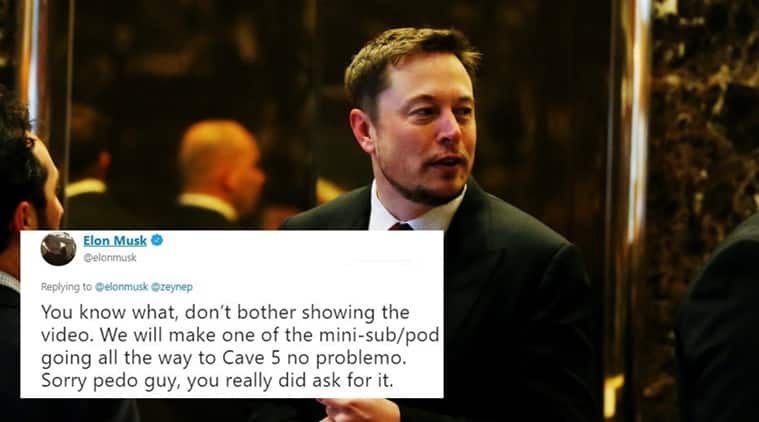 Musk gave no evidence for alleging Unsworth was a pedophile. Unsworth said he would consider taking legal action against Musk over the remarks, in comments filmed in Chiang Rai on Monday by Australia’s 9News. “It’s not finished. No justification. At the end of the day we were here to rescue 12 young boys. I don’t really understand the guy. Obviously it’s a bruised ego. I’ll take advice when I get back to London,” Unsworth told 9News. Reuters could not immediately reach Unsworth for comment. His wife, Voranan Rattawipakhun, told Reuters on Monday that her husband would return to Britain on July 19, where he will speak to lawyers.

A police officer in the Chiang Rai district where Unsworth has lived for seven years, who declined to be named because he was not authorized to speak to the media, said that no charges or complaints had ever been filed against Unsworth.

In a Tweet, Musk had proposed “a tiny kid sized submarine” for the rescue. He showed a test of the submarine in a Los Angeles swimming pool on July 9. Last week, Narongsak Osottanakorn, the leader of the rescue operation in Thailand, rejected Musk’s mini-submarine as not suitable for the task. Musk responded on Twitter on July 10, calling Osottanakorn “not the subject matter expert.”

Musk also regularly uses Twitter to criticize media reports on Tesla, which has struggled to meet its own production targets for its Model 3 sedan, which is seen as key to the company’s profitability.