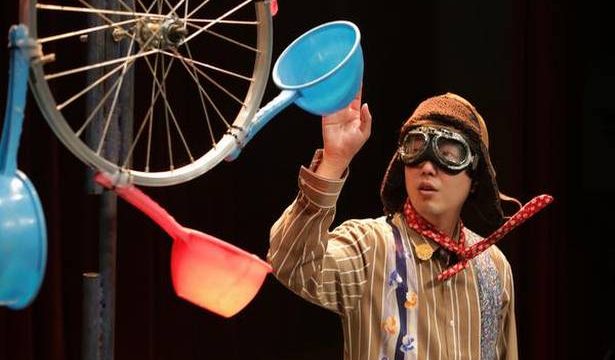 ‘Junk Clown’, a Korean play for children, brings the concept of recycling to the table through mime

Broken barrels, bent pans and torn umbrellas are strewn across the stage: things that embody everyday life. Among them, clowns frolic. Pranks and games are afoot as they prance about playing with anything in sight.

Junk Clown, a Korean theatre production for children by Hyunjang Theater Company, is light-hearted yet thought-provoking. It asks deep questions through a seemingly simple, non-linear narrative.

Now, the non-verbal play reaches the city audience through a virtual screening by InKo Centre, Chennai in collaboration with Korea Arts Management Service, Ministry of Culture, Sport and Tourism, Republic of Korea and Centre Stage Korea.

Junk Clown started as ‘My Friend’s Plastic’ in 2000 and became ‘Kung Kung Kung Playground’ around 2008. It was only in 2017, that the play came to its current moniker. Using techniques of pantomime, the narrative urges one to become environmentally conscious in a pandemic world.

Discarded junk become characters. “In this era of overconsumption, where production is far beyond demand, I came to think that even human imagination is closed, and it is not toys with specific shapes that stimulate children’s creativity and imagination, but things that are abandoned in life,” says director Ko Jae-Kyung.

The narrative carries on without a single word uttered. The director, who was a mime artiste himself, believes that the dramatic illusion of the play is best portrayed through mime. And, hence the cast is identified as clowns. “‘Clowns’ are familiar to the audience. Audiences willingly lower their guard and easily engage with them,” he says.

The inception point of Junk Clown was in fact, junk, says Jae-Kung. “When we first produced this play, the actors visited a real junk shop. I came up with the idea of a scene there.”

All the pranks in the show are modelled after the various games that adults played during their childhood.

Jae-Kyung believes that a virtual screening in no way matches the live performance, especially since the play is developed based on the response from the audience. However, the play was filmed with nine high-end cameras at Seoul Arts Centre and is currently being screened at 34 domestic and international venues. When the situation gets better, Jae-Kyung says, “We will travel all over the world. We want to meet children and adults around the world through performances.”

Junk Clown will be available to stream from July 16 to July 25 (6 pm) at www.inkocentre.org/Virtual_Connect_Infotainment.html