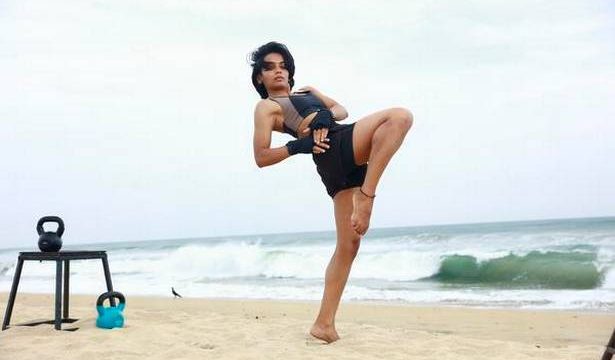 Chennai’s Vridhi Kumari is the only Indian woman to win a medal at the recently concluded IMMAF 2021, in Abu Dhabi

In the cage, as she braced for the fight, Vridhi Kumari could only think of her mother’s words ‘Don’t give up.’

The 21-year-old from Chennai threw her best punches and kicks to win a bronze medal in the Atomweight Category (Seniors) at the recently concluded IMMAF (International Mixed Martial Art Federation) World Championship 2021 at Palms Sports Arena, Abu Dhabi. With this, she became the first Indian woman to win a medal for the country in this category at IMMAF.

An elated Vridhi, on phone from the UAE, says, “It was my first international fight so I was very excited. Everything about it was different. Both my opponents were more experienced in international fights and held titles. One was from Kazakhstan and the other from Ireland. But, I had no doubt or fear because we went with a solid game plan.”

A total of 400 athletes participated from 56 countries. The Indian contingent was dominated by athletes from Tamil Nadu where six of the 12 representatives were from Combat Kinetics, headed by Ajit Sigamani. Apart from Vridhi the other athletes are Ganesh Raj Srinivasan, Lenin Prakash S, Shabarish Ayyanar, Syed Abdul Nazzeur and Vijay Venkatesh. (After Tamil Nadu’s stellar performance in the previous two National Championships, winning a total of 12 golds, Ajit was made coach of the Indian team.)

Vridhi started learning MMA (Mixed Martial Arts, full combat contact sport, also known as cage fighting. ) just a few years ago at the age of 19 in 2019. Now, a two-time national champion, she says, “I hadn’t done any type of martial arts before I joined Combat Kinetics. I just joined to learn, not with the intention of entering competitions.”

While she may be winning medals with her kicks and punches, Vridhi’s initial interest was in boxing. “I wanted to box for self defence. Once I enrolled at the Combat Kinetics, I came to know about MMA, tried it and started loving it,” she says, adding “There’s something interesting to learn everyday.”

She adds, “It has helped me grow as a person, improved my confidence and my lifestyle as well. I feel healthier now. When we travel for competitions, we get to meet fighters from different nationalities who come from different cultures, which is again a learning experience.”

Talking about her training and workout routine, she says she began with 90 minutes a day. Once she decided to compete her training went up to three hours a day. “Now it’s six to seven hours a day, six days a week.” Her training includes “weight training alongside calisthenics. To improve other aspects of performance we do running, sprinting and swimming.”

What should Vridhi’s opponents be worried of in the ring: her kick or her punch? She giggles “I feel my punch is more powerful since I have put in more training in that. But my partners have told me my kicks too are solid while sparring.”