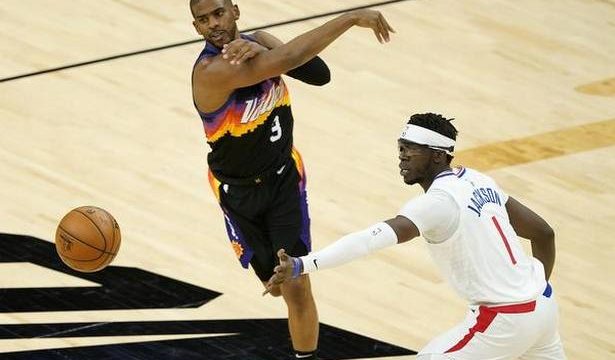 The Phoenix Suns clinched its first playoff berth since the 2009-10 season with a 109-101 win over the visiting Los Angeles Clippers on Wednesday.

Chris Paul scored 15 of his 28 points in the fourth quarter, and he also had10 assists. Phoenix is now two games ahead of the Clippers for second place in the Western Conference. Utah Jazz lead the conference standings by a game over the Suns.

Bojan Bogdanovic scored 24 points and Jordan Clarkson added 23 to lead Utah to a dominating 154-105 victory over host Sacramento as the Jazz set a franchise record for most points in a game.

Russell Westbrook finished with 18 points, 18 rebounds and 14 assists for his 30th triple-double of the season, and Bradley Beal scored 27 points, as Washington beat visiting Los Angeles 116-107.

Nikola Jokic had 32 points and delivered a key block on Zion Williamson in the final seconds to help host Denver hold on to beat New Orleans by two points, 114-112.

In other matches, CJ McCollum recorded 26 points to help Portland roll over host Memphis and Julius Randle scored 34 points as host New York pulled away in a dominating fourth quarter in a blowout victory over Chicago.