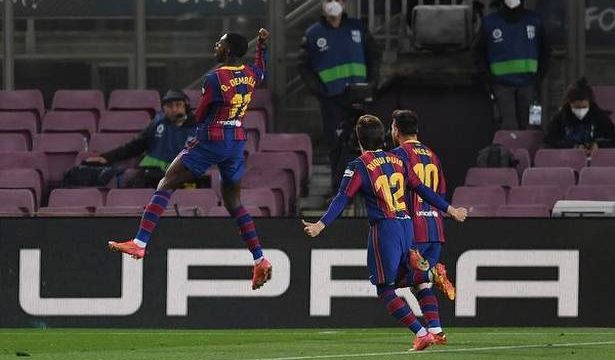 Moves within a point of Atletico; Lingard inspires West Ham

Ousmane Dembele volleyed in a 90th-minute winner against Real Valladolid on Monday to fire Barcelona to within a point of Atletico Madrid ahead of next weekend’s Clasico in the LaLiga.

Barca looked set for a damaging stalemate at Camp Nou after Atletico’s defeat by Sevilla on Saturday but Valladolid had Oscar Plano harshly sent off with 12 minutes left and Dembele snatched a 1-0 victory. His strike could prove a crucial moment in the title race, with Barca now breathing down Atletico’s necks ahead of Saturday’s meeting with Real, which is three points off the top.

It might have been more complicated had Plano not been shown a red card in the 78th, his hack on Dembele from behind giving Barca advantage. Victory makes it six in a row for the team in La Liga. To mark Messi breaking Xavi Hernandez’s appearance record for the club, he was presented with a framed shirt before kick-off.

In the Premier League, Jesse Lingard inspired West Ham to a thrilling 3-2 win at Wolves to move fourth as Everton’s hopes of a top-four finish were dented in a 1-1 draw against Crystal Palace.