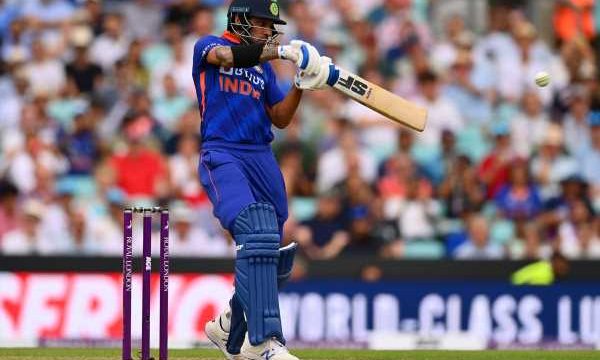 Senior India batter Shikhar Dhawan on Wednesday moved up a place to joint 13th spot in the latest ICC ODI rankings on the back of his match-winning knock against the West Indies in the first ODI.

Dhawan, who is captaining India in the ODI series in the West Indies, made 97 in the first match at Port of Spain, in Trinidad.

Another India batter Shreyas Iyer, who struck back-to-back half centuries in the first two ODIs against the West Indies, to climb 20 places to joint 54th spot among batters.

Iyer had struck 54 and 63 in the first and the second ODI against West Indies.

Pacer Mohammad Siraj broke into the top 100, as he rose to 97th spot, after taking 2/57 in the first ODI against the West Indies.

Virat Kohli and Rohit Sharma, who both have been rested for the series against West Indies, have dropped a place each to fifth and sixth spot respectively.

For West Indies, opener Shai Hope is up three places to 12th after his 115 in the second match, which went in vain while speedster Alzarri Joseph has gained two places to reach 16th position after grabbing two wickets each in both matches against India.

Meanwhile, South Africa’s Quinton de Kock has progressed two places to fourth after his 92 not out in the third match against England which was washed out by rain, ending the series at 1-1.

England pacer David Willey has moved up to the 23rd spot among bowlers.

Meanwhile, in the ICC Test rankings, Pakistan opener Abdullah Shafique, who was declared man of the match for his second innings knock of 160 against Sri Lanka and has amassed 720 runs in his first six Tests, gained 23 slots to reach 16th position with a Pakistan record of 671 rating points.

The previous best by a Pakistan batter after six Tests was Saeed Ahmed’s 614 rating points. Only two batters have ever had more points after six Tests – Sunil Gavaskar (692) and Donald Bradman (687).

Pakistan captain Babar Azam’s scores of 119 and 55 against Sri Lanka saw him overtake Australia’s Steve Smith to reach a career high third ranking with a career best rating of 874 points.

Babar is presently top-ranked in both ODIs and T20Is and remains the only batter in the top 10 of all the three lists.