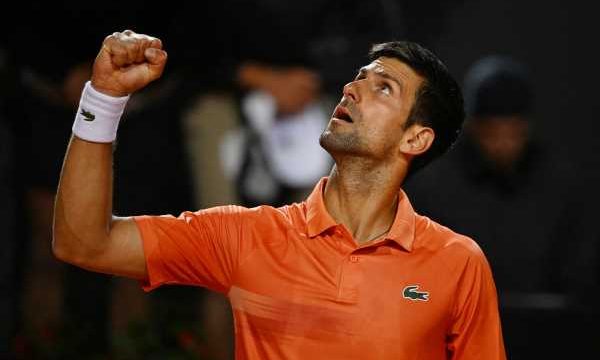 Top seed Novak Djokovic beat Canadian Felix Auger-Aliassime 7-5, 7-6(1) to reach the semi-finals of the Italian Open on Friday and move within one win of 1,000 career victories.

By reaching the semis in Rome the Serb also retained his world number one ranking and avoided surrendering top spot to Russian Daniil Medvedev for the second time this year.

Djokovic and Auger-Aliassime were neck and neck until the Serb broke to lead 5-3 but the eighth seed fought back.

It proved only a blip though as Djokovic wrapped up the opening set in style.

The 21-year-old Aliassime was applauded by Djokovic for his display of endurance in rallies but again fell 5-3 behind, only to drag himself back into the contest again.

Having forced a tiebreak though, Aliassime was no match for Djokovic who found another gear when required.

Djokovic will next face Norwegian fifth seed Casper Ruud, who continued his good form on European clay as claimed a hard-fought 7-6(7), 7-5 win against Canada’s Denis Shapovalov.

“He has the lethal serve honestly… It was not easy for me at all to return. He’s also returning well, moving well. He’s a very complete player,” Djokovic told reporters.

“I was a set and 5-2, match-point, serving for the match. Credit to him for fighting back. Amazing atmosphere as well tonight.”

World number three Alexander Zverev remained on course to claim his first title of the season after overcoming Cristian Garin to set up a semi-final showdown with Stefanos Tsitsipas, who saw off home favourite Jannik Sinner.

Zverev, who won the title in Rome in 2017, eased into the last four with a 7-5, 6-2 win over Garin in the pair’s first meeting since the Chilean upset him on home soil en route to winning the ATP 250 event in Munich three years ago.

Garin, the only unseeded player remaining, had the first break point of the match at 3-2 but Zverev squirmed his way out of it and broke his 25-year-old opponent to take a 4-3 lead and, after some poor shot selection, closed out a gritty opening set.

“I think it was a high level match, at times it wasn’t pretty tennis but I got the job done and that’s the most important thing,” said Zverev, who is yet to drop a set in Rome.

Tsitsipas kept his composure in front of a raucous crowd to hold off Sinner for a 7-6(5), 6-2 victory.

In an entertaining opening set lasting nearly an hour and a half, Tsitsipas raced to a 3-0 lead and Sinner battled back to draw level before the Greek edged it on the tiebreak.

Tsitsipas cruised through the second set and, after a stoppage in play at match point when a spectator fell ill, dealt with Sinner’s miscalculated drop shot to triumph.

The 23-year-old beat Zverev in Monte Carlo before clinching the title in April before the German avenged his defeat in Madrid last week.

“He’s a player that challenges me when I’m out on the court,” Tsitsipas said of Zverev. “He has a lot of experience on the tour, much earlier than when I started playing here.

“We have similar game styles but he is one of the most difficult players on the tour.” World number one Iga Swiatek extended her winning run to 26 matches with a 7-6(2), 6-0 victory over Bianca Andreescu in the quarter-finals of the Italian Open on Friday.

Swiatek, who has put together the longest winning run since Serena Williams racked up 27 straight victories during 2014 and 2015, will face Aryna Sabalenka in the semi-finals in Rome.

The 2020 French Open champion is seeking her fifth title this season, having won on hard courts in Doha, Indian Wells, Miami and on clay in Stuttgart.

“I feel like every match I’m playing better and better,” Swiatek told reporters. “Even though the first set was pretty tight, I had some ups and downs, I feel like I could play well in important moments and break back any time.

“I’m pretty happy that also the second set was more solid because it shows that I’m just, I don’t know, learning my lessons throughout the whole match.”

Trailing 5-3 and with Swiatek serving for the set, Andreescu broke to stay alive in the contest and forced it to a tiebreak, where the Canadian could not keep up with the top-ranked Pole.

Swiatek earned a quick double break to lead 3-0 in the second set, thanks to a series of electric baseline exchanges, before holding her serve and breaking Andreescu once again.

The Canadian clung on valiantly, saving two match points but her backhand found the net on a third as 20-year-old Swiatek wrapped up the match in one hour and 44 minutes.

Earlier, Belarusian Sabalenka recovered from a set down to notch her first win over Amanda Anisimova in her fifth attempt, beating the American 4-6, 6-3, 6-2.

Swiatek leads the overall head-to-head with Sabalenka 2-1, including both of their meetings this year in the Doha quarter-finals and Stuttgart final.

Ons Jabeur, who won in Madrid last week, fought back from the brink of defeat to advance with a 1-6, 7-5, 6-1 victory over Greek fourth seed Maria Sakkari.

The Tunisian was down 6-1, 5-2 before she turned the match around to claim her 10th straight win and set up a last-four meeting with Daria Kasatkina.

Kasatkina was leading 6-4, 3-2 when Switzerland’s Jil Teichmann retired with an injury.