‘Mr. Djokovic is not being held captive in Australia, he is free to leave at any time that he chooses to do so.’ 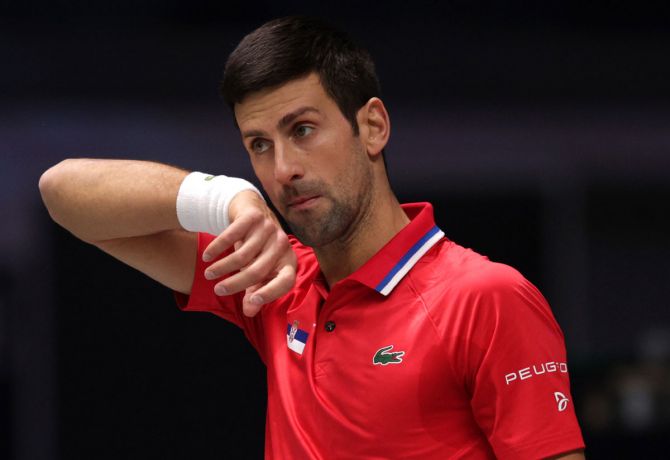 World number one Novak Djokovic spent a second day in immigration detention in Australia on Friday as his lawyers battled to secure his release to play in the Australian Open and be exempt from strict COVID-19 vaccination requirements.

Australian Home Affairs Minister Karen Andrews hit back at suggestions by Serbian supporters, including Djokovic’s family, that he is being “held captive”, stressing the star player is free to leave the country at any time.

Djokovic, who is chasing a record-breaking 21st Grand Slam in Melbourne from January 17, was detained at the airport when he arrived on Wednesday evening.

His entry visa, supported by an exemption from the country’s vaccination requirements, was revoked, prompting his lawyers to successfully scramble for legal approval for him to remain in the country until a full hearing scheduled for Monday.

“Mr. Djokovic is not being held captive in Australia, he is free to leave at any time that he chooses to do so and Border Force will actually facilitate that,” she told reporters.

Spanish champion Rafael Nadal told reporters in Melbourne he felt sorry for his rival “but at the same time, he knew the conditions since a lot of months ago.”

“Novak, stay strong, buddy,” Sandgren said. “Hope you get out of there soon.”

Djokovic’s wife, Jelena, posted a photo on Instagram of the couple embracing on a beach to mark Orthodox Christmas on Friday, saying “the only law that we should all respect across every single border is love and respect for another human being.”

Djokovic’s family held an emotional news conference at his restaurant in Belgrade on Thursday, with his nine previous Australian Open trophies on display, before protesting in front of parliament.

“They are keeping him in captivity. They are stomping all over Novak to stomp all over Serbia,” Srdjan Djokovic said of his son.

Some critics say Prime Minister Scott Morrison is using the issue to boost his pandemic-fighting credentials with an election looming in coming months amid a record surge in new COVID-19 infections, claims the government denies.

The initial decision to grant an exemption to Djokovic, who has consistently refused to disclose his vaccination status while publicly criticising mandatory vaccines, was widely criticised in a country where more than 90% of the population are double vaccinated.

Djokovic will get his day in a court on Monday, when a judge attempts to unravel the complexities of Australia’s federal system, under which states and territories can issue vaccine exemptions but the federal government controls international borders and can veto those exemptions.

Djokovic had received permission to enter Victoria from the state government, which does not have authority to issue visas to international visitors. While the reason for his medical exemption was not officially released, The Age newspaper reported it was on the basis that he had contracted COVID-19 in the past six months.

On his arrival in Melbourne on Wednesday night, however, Federal Border Force officials at the airport said Djokovic was unable to justify the grounds for his exemption.

Morrison said Tennis Australia had been advised weeks ago that a recent infection did not meet the criteria for exemption, even though a government task force that provides guidance on such matters had recommended that an infection in the past six months should be sufficient to qualify.

Tennis Australia and Victoria government officials said Djokovic had received no preferential treatment, adding that he was among “a handful” of approvals for exemptions in an anonymous and independent assessment of 26 applications.