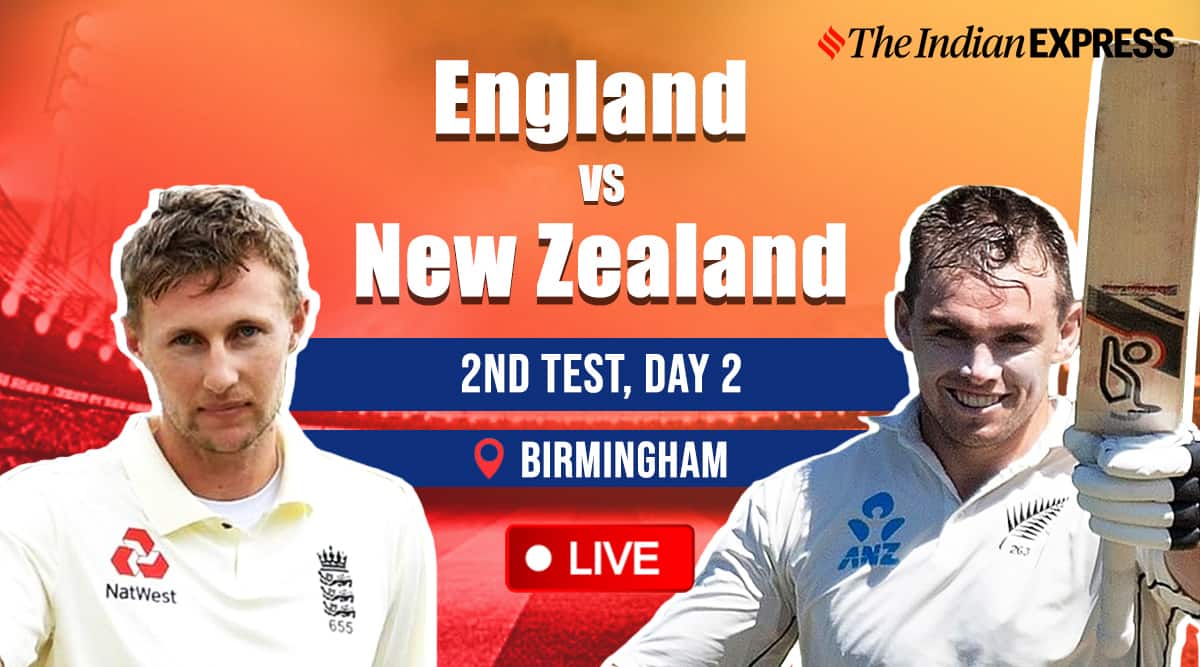 England vs New Zealand (ENG vs NZ) 2nd Test Live Cricket Score Updates: Dan Lawrence with Mark Wood (16 not out) of England begin Day 2 of the second and final Test against New Zealand at 258/7 at Edgbaston on Thursday. Rory Burns fought hard as wickets fell around him and looked set to reach his fourth Test century in front of a boisterous Edgbaston crowd of around 17,000 fans before falling for 81, caught by stand-in skipper Tom Latham off Trent Boult.

The Black Caps made six changes from the first Test including the late, injury-enforced withdrawal of wicketkeeper B.J. Watling. The tourists chose to rotate ahead of the World Test Championship final against India, which is their priority and starts on June 18. England’s only change saw Olly Stone replace fellow fast bowler Ollie Robinson, who was suspended for the match by the England and Wales Cricket Board pending an investigation into historic discriminatory tweets that resurfaced during the first Test.

Stuart Broad traps stand-in skipper Tom Latham in front of the stumps. That looked out as soon as it hit the pads. Latham discusses with Devon Conway and chooses not to review. He departs for 6. Will Young is the new batsman in. NZ 15/1 after 5.4 overs

Tom Lathan and Devon Conway open the innings for New Zealand. Both batsmen have scored one boundary each. Conway survived a run out scare on the non-striker’s end after Stuart Broad got his hand on the ball on follow through. So far, the ball has not been swinging as expected despite overcast conditions. NZ 13/0 after 4 overs

Trent Boult gets rid of the No.11 batsman James Anderson. DRS works in New Zealand’s favour as Anderson is adjudged leg before wicket. He departs for 4 and Boult finishes with four wickets in the innings. Daniel Lawrence runs out of partners as he remains unbeaten for 81. ENG 303 all out after 101 overs

Dan Lawrence has moved into 80s with two boundaries. Lawrence is taking the chance if the ball is pitched in his zone. He is also trusting James Anderson to face Kiwi fast bowlers. Anderson has managed to get off the mark with a boundary with an outside edge going past the slip fielders. Tom Latham has introduced Neil Wagner into the attack replacing Matt Henry. Lawrence is still hopeful of getting to his maiden Test century. ENG 303/9 after 100 overs

Comprehensive dismissal. Trent Boult swings it away from Stuart Broad and the outside edge carries to the wicketkeeper. A four-ball duck for Broad and Daniel Lawrence is running out of partners. Lawrence is batting on 71. ENG 289/9 after 96.2 overs

Matt Henry ends Mark Wood’s delightful stay at the crease. Henry bowls it full and swinging in to the stumps. Wood departs for 41 from 80 deliveries. It was a fantastic innings, especially for a No.9 batsman. ENG 288/8 after 95.1 overs

Mark Wood seems to be done playing the role of defending and supporting Daniel Lawrence. Wood is looking for boundaries and is not afraid of swing early on in the day. He has moved to 41, on his way to 2nd Test century. So far, he has hit six boundaries already. Trent Boult and Matt Henry are taking a beating here. ENG 288/7 after 95 overs

Day 2 begins. Daniel Lawrence gets off the mark first ball and Trent Boult tries to trouble Mark Wood with pace and bounce. Boult hits Wood on the arm but the Englishman ends the over with a glorious drive through the covers for a boundary. ENG 263/7

On Day 1, England were reduced to 222/7 and it seemed like they will be bundled out before the end of the day’s play. However, Mark Wood supported Daniel Lawrence to prevent BlackCaps bowler from mopping up the tail quickly. With Lawrence batting on 67 and Wood supporting him from other end, England will look to post a first innings score around 350. Lawrence has a chance of bringing up his maiden Test century with Stuart Broad and James Anderson still to come.