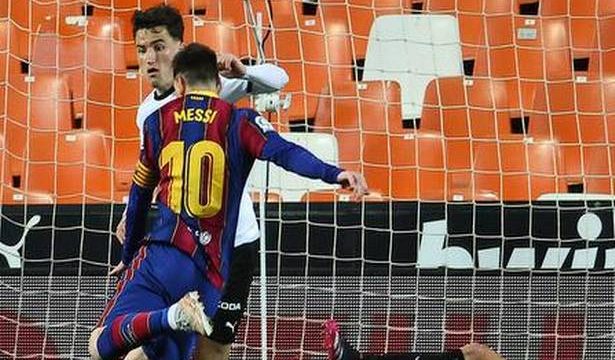 Lionel Messi missed a penalty but still scored twice, including an exquisite free-kick, as Barcelona edged a five-goal thriller with Valencia on Sunday to stay within touching distance of the top of LaLiga.

After Real Madrid and Atletico Madrid both won on Saturday, there was no margin for error at Mestalla, where Barca’s 3-2 win reduced the gap behind Atletico back to two points, now with four games left to play.

Gabriel Paulista headed Valencia in front early in the second half before Messi missed a penalty, only to smash in from the resulting scramble.

Griezmann and a superb Messi free-kick looked to have then made the victory secure but Carlos Soler’s stunning strike from distance left Barcelona holding on at the end, a nerve-wracking win meaning it could overtake Atletico Madrid next weekend if it beats Diego Simeone’s side at Camp Nou.

“We knew we would not have any calm games,” said Gerard Pique. “We are still in the fight. Calm games mean you’re not competing for anything.”

Gareth Bale scored a hat trick as Tottenham stayed in the Champions League qualification race with a 4-0 win over relegated Sheffield United on Sunday.

Bale claimed his first treble since returning on loan from Real Madrid for this season, and Son Heung-min also netted, as Tottenham rose to fifth place — five points behind Chelsea with four games left to play.

Bale took his Premier League tally to eight goals in the last eight games, but with that must come a sense of what might have been this season.

Bale was under-used by former manager Jose Mourinho, even when he had regained peak condition. Playing with freedom in a front four with Harry Kane, Son and Dele Alli, Spurs were a constant threat and a far cry from the pragmatic style that dogged Mourinho’s era.

It may have come too late to gatecrash the top four this season, but playing like this makes them a strong bet to finish in a Europa League spot under interim manager Ryan Mason.