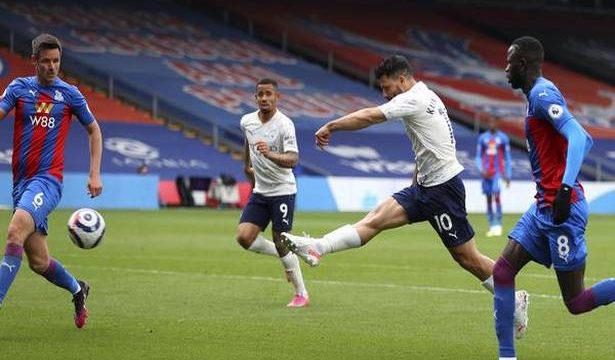 Elche hands Atletico a lifeline with a missed penalty

Manchester City is within touching distance of the Premier League title after Sergio Aguero and Ferran Torres sealed a 2-0 win at Crystal Palace on Saturday.

Pep Guardiola’s side sits 13 points clear at the top and will be crowned champion if second-placed Manchester United loses against Liverpool on Sunday.

After a tepid first half in south London, it was fitting that Aguero — the architect of so many big moments in City’s history — should open the scoring with a typically lethal finish.

Torres killed off Palace two minutes later as City eased to an 11th successive away victory in the Premier League, equalling the English top-flight record.

Even if United does not slip up against Liverpool at Old Trafford, City has four matches left to secure the one win it needs to clinch the title.

City was languishing in 14th place in late November but a blistering run since then has carried it to the brink of a third title in four seasons.

Leicester’s bid for Champions League soccer suffered a minor setback when it had to settle for a 1-1 draw with 10-man Southampton on Friday.

Saints played for 80 minutes a man down after Jannik Vestergaard was sent off for bringing down Jamie Vardy on the edge of the hosts’ 18-yard box.

Brendan Rodgers’ team was unable to take full advantage of the early dismissal and the result moved the Foxes eight points clear of fifth-placed West Ham in the race for European football.

Atletico Madrid stayed in charge of LaLiga’s four-way title race by grinding out a 1-0 win at struggling Elche on Saturday but rode its luck to the extreme when the hosts missed a penalty in stoppage time.

Marcos Llorente scored the only goal of the game with a deflected shot in the 23rd minute but gave away the penalty in the 90th for a handball as Atleti defended its slim lead.

Elche midfielder Fidel Chaves took the penalty and his shot beat goalkeeper Jan Oblak but came off the post.