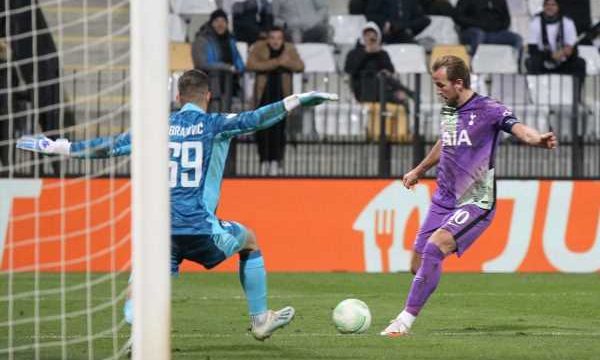 Images from action in the Europa League matches on Thursday.

Tottenham Hotspur coach Antonio Conte got a taste of just how tough a task it will be to turn the team’s fortunes around as they suffered a humiliating 2-1 defeat by Slovenian side NS Mura in the Europa Conference League on Thursday.

The Premier League team fell behind in the 11th minute when Tomi Horvat arrowed a fine shot into the top corner, before Spurs midfielder Ryan Sessegnon was sent off for picking up two yellow cards inside 31 minutes.

The 10 men fought back and captain Harry Kane equalised in the 72nd minute, only for Amadej Marosa’s 94th-minute deflected strike to give the side sitting fifth in the Slovenian top flight a famous victory.

Mura collected their first points in the inaugural Conference League at the fifth attempt. Spurs are second in the group and can no longer finish top to secure an automatic last-16 spot, although they can still earn a playoff place.

Spurs are level on points with third-placed Vitesse Arnhem, ahead of their final match against unbeaten group leaders Rennes on December 9.

“After three weeks I am starting to understand the situation,” Conte said after overseeing his third game in charge. “It is not simple. At this moment the level at Tottenham is not so high.

“I am happy to stay here but we have to work a lot to improve the quality of the squad. There is an important gap with the top teams but I am not scared,” the Italian added.

“I am not a magician and after three weeks I have found players that want to work and have great commitment but sometimes it is not enough.” Leicester City beat Legia Warsaw 3-1 to leap from bottom to top of Europa League Group C and keep alive their hopes of reaching the knockout stages.

The Premier League side have eight points from five games, one more than Spartak Moscow and Napoli and two ahead of Legia, with all four teams still in contention to advance ahead of the last round of games.

Napoli, beaten 2-1 at Spartak on Wednesday, host Leicester while the Russian side visit Legia on Dec. 9.

Patson Daka fired Leicester ahead in the 10th minute with a clinical finish and James Maddison made it 2-0 with a superb shot on the turn before Filip Mladenovic pulled one back for Legia.

Mladenovic swept in a rebound after Kasper Schmeichel saved Mahir Emreli’s penalty but Wilfred Ndidi, who gave away the spot-kick, made amends with a towering header from Maddison’s corner in the 33rd minute.

Rangers advanced to the knockout stages from Group A with a match to spare after Alfredo Morelos scored twice to secure a 2-0 home win over Sparta Prague, as they joined runaway group leaders Olympique Lyonnais in advancing.

The Colombian striker opened the scoring in the 15th minute and added the second in the 49th with a header into an empty net as he intercepted a poor pass by Sparta defender Filip Panak across his own area.

Lyon stayed top after two goals from Rayan Cherki and another by Islam Slimani gave them a 3-1 win at Danish side Brondby.

Monaco advanced from Group B with a 2-1 home victory over Real Sociedad as goals from Kevin Volland and Youssouf Fofana cancelled out Alexander Isak’s effort for the visitors.

Vinicius and Bruma scored for PSV Eindhoven in a 2-0 win over visiting Sturm Graz and the Dutch side need a draw in their final group match at Sociedad to progress.

Late substitute Tiquinho Soares scored a 90th-minute winner for Olympiakos to sink Fenerbahce 1-0 in Group D and send the Greek side through along with Eintracht Frankfurt, who stayed top after a 2-2 home draw against Antwerp.

Galatasaray knock Marseille out and advance Galatasaray reached the Europa League knockout stages with a pulsating 4-2 home win over Olympique de Marseille, which eliminated the Ligue 1 side from Europe’s second-tier competition.

Lazio joined the Turkish side from Group E after two Ciro Immobile penalties helped the Italians to a 3-0 win at Lokomotiv Moscow, while Bayer Leverkusen advanced from Group G after a rollercoaster 3-2 home win over Celtic.

Roared on by a fervent home crowd, Galatasaray took a 12th-minute lead as Alexandru Cicaldau rifled in a shot from 15 metres before Duje Caleta-Car turned the Romanian’s low cross into his own net.

Sofiane Feghouli made it 3-0 with a tap-in before Arkadiusz Milik pulled one back when he scored on the rebound after Mulsera parried the Polish striker’s penalty.

Lazio had a Toma Basic header cleared off the line before Immobile converted his second-half spot-kicks in quick succession, sending home keeper Daniil Khudyakov the wrong way with the first before he drilled in the second off the post.

Robert Andrich fired Leverkusen ahead and grabbed an 82nd-minute equaliser after Josip Juranovic and Jota had turned the tide for Celtic, with Moussa Diaby netting an 87th-minute winner to send the Bundesliga side through.

They were joined by Spaniards Real Betis, who eased to a 2-0 home win over Hungary’s Ferencvaros thanks to goals from Cristian Tello and Sergio Canales.

West Ham had already booked their place in the knockout stages and they stayed top of Group H after first-half goals from Andriy Yarmolenko and Mark Noble secured a 2-0 win at Rapid Vienna.

Dinamo Zagreb missed a chance to join them as they were held to a 1-1 home draw by Belgium’s Genk, with both sides still in contention to clinch the runners-up spot in the last round of games on Dec.7.

Group F is still wide open after Red Star Belgrade beat Ludogorets 1-0 thanks to a Mirko Ivanic effort and Midtjylland ground out a 3-2 home win over Braga, Evander Ferreira netting a stoppage-time penalty for the Danish side.