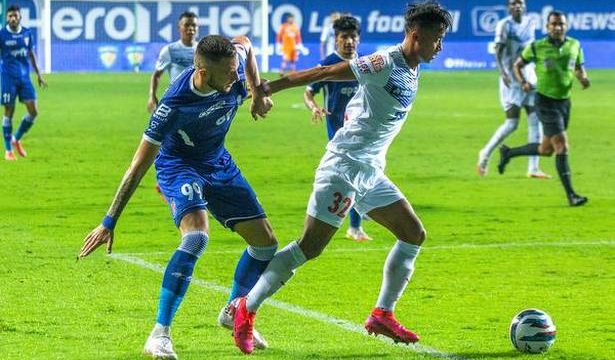 Chennaiyin pays the price for the myriad missed opportunities

Bengaluru FC notched up a much-needed win, beating Chennaiyin FC 4-2 in an error-strewn but entertaining encounter at the Tilak Maidan Stadium in Vasco on Thursday.

Only BFC’s second victory of the season, it was sealed in the space of four second-half minutes.

At 2-2 and 20 minutes to go, substitute Udanta Singh scored after a neat dummy from Brazilian Cleiton Silva, in which two other substitutes — Sunil Chhetri and Danish Farooq — also had roles.

Immediately after, another substitute in Pratik Chowdhary bundled the ball in after a blunder from goalie Vishal Kaith — his second of the match — where he fluffed an easy take off a corner.

But at the start of the evening, it was all Chennaiyin. The sensational Mirlan Murzaev put his team ahead in the fourth minute with a fine solo goal. Forward Rahim Ali should have scored thrice in the opening 20 minutes alone, but missed all three.

Bozidar Bandovic’s side paid the price as Silva converted from the penalty spot in the 39th minute. On the stroke of half-time, Kaith charged out to punch a corner to safety, but barely touched it and the ball went in off BFC defender Alan Costa’s shoulder.

After the restart, Rahim finally scored, but via a gift from BFC goalie Gurpreet Singh Sandhu, who fumbled a weak shot.

At 2-2, Chennaiyin established the upper hand again but it was BFC which had the last laugh.