‘When he is batting brilliantly and if he is in a good mood, you never know what he is up to.’ 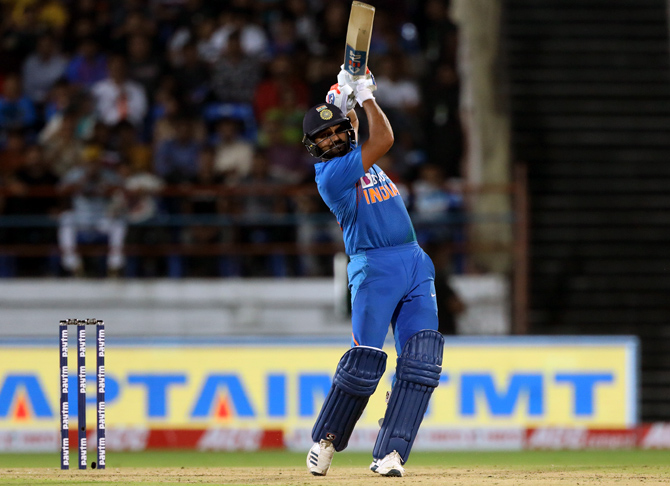 Bangladesh captain Mahmudullah blamed his team’s middle-order collapse as one of reasons behind their eight-wicket defeat against India in the second T20 International in Rajkot on Thursday.

The Indian spin duo of Yuzvendra Chahal (2/28) and Washington Sundar (1/25) stemmed the run flow in the middle overs to restrict Bangladesh to a sub-par 153 for six after the visitors got off to a bright start.

“Losing a few wickets in the middle overs cost us and these are the areas we need to look on. The openers gave us a very good start and that was a 180-plus wicket. The wicket was very good to bat on.

“It was the momentum of the game that we needed to understand. We should have understood the threats we faced at that particular time, but we didn’t recognise those things and fell short of those runs,” the Bangladesh skipper admitted.

Mahmudullah squarely put the blame on his batsmen for not putting up a winning total on a fine Rajkot wicket that offered good carry and bounce.

“I think if you have more than 40 dot balls in a T20, you have less chance of winning the match. We played 38 dot balls there. Maybe that’s okay, but there will definitely be opportunities to improve,” he said.

“But our batsmen had to take more responsibility. The goal was to get a good score but we couldn’t do that. It is the failure of our batsmen.”

Chasing the 154-run target, India rode on skipper Rohit Sharma’s brilliant innings of 85 from 43 balls to cruise to an emphatic eight-wicket victory and level the three-match series 1-1.

Rohit toyed with the opposition attack, hammering six sixes and as many fours during his knock, and the Bangladesh skipper said it is hard to stop his Indian counterpart when he is on song.

“If Rohit is having a good time, I think it is really hard to stop him. When he is batting brilliantly and if he is in a good mood, you never know what he is up to. But if we could have got 175-plus, we could have given ourselves a bit of a chance to defend,” said Mahmudullah.

“The wicket was good to bat on and the new ball was coming nicely on to the bat. If you get a good start early on, especially batsmen like Rohit and Shikhar (Dhawan), it is hard to stop them on that wicket.”

Asked whether senior pro Mushfiqur Rahim made a mistake trying to attack Chahal, which led to his early dismissal, Mahmudullah replied: “If you see that the way Mushi (Mushfiqur Rahim) got out, that is one of his strong shots to score, so I don’t blame him. I don’t blame anyone.”