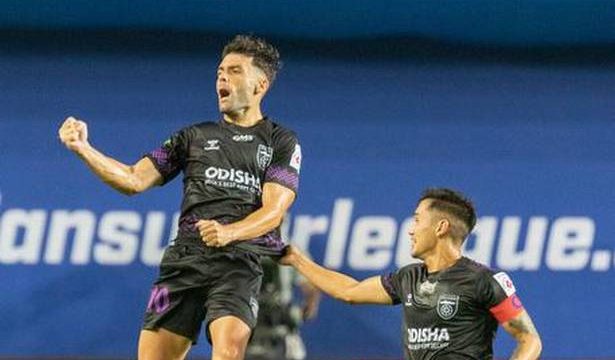 A splendid double from Javi Hernandez and a fine individual effort from Aridai Suarez handed Odisha FC a 3-1 victory over Bengaluru FC in its Indian Super League opener at the Tilak Maidan Stadium in Goa on Wednesday.

That Hernandez’s goals had their origins in completely avoidable mistakes from BFC shouldn’t take anything away from the execution; the first was a delightful long-range chip over the entire defence and the second a swerving free-kick from just outside the penalty area.

At 1-2, BFC skipper Sunil Chhetri could have brought his side back and equalled Ferran Corominas’ all-time ISL goal tally (48), but his penalty in the 61st minute was saved. Substitute Cleiton Silva, who earned the spot-kick, bundled in the rebound, only for the referee to disallow the goal.

Replays showed that the Brazilian had encroached the penalty box before the kick was taken. But the same replay also showed an Odisha player encroaching, which should have resulted in the penalty being retaken.

Regardless, BFC was clearly below par. The evening was off to the worst possible start when a botched clearance by Gurpreet Singh Sandhu, following a miscommunication with his defenders in the third minute, was beautifully chipped into the goal by Hernandez.

Marco Pezzaiuoli’s outfit equalised in the 21st minute with Alan Costa towering over Nandhakumar Sekar to turn in a fine corner from Roshan Naorem.

Hernandez’s second was through a brilliant free kick to the top-right corner, but that came after a blunder from Udanta Singh. The winger misplaced a pass, and in an attempt to make amends, ended up fouling Jonathas Cristian.

In the 90th minute, Silva saw a powerful shot from close range saved by Odisha goalie Kamaljit Singh. Soon enough, Suarez turned Pratik Chowdhary inside out and bundled the ball in to put the result to bed.