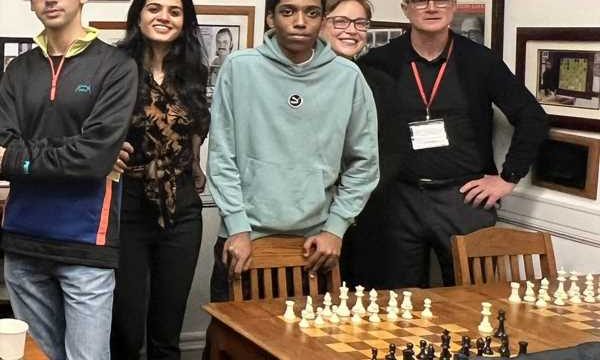 Indian Grandmasters R Praggnanandhaa and Arjun Erigaisi suffered defeats in the opening round of the Meltwater Champions Tour Finals early on Tuesday.

While the 17-year old Praggnanandhaa went down 1.5-2.5 to Shakhriyar Mamedyarov of Azerbaijan, Erigasi lost to Poland’s Jan-Krzysztof Duda 0.5-2.5.

World No.1 Magnus Carlsen began his campaign with a 2.5-1.5 win over American Wesley So and Dutch GM Anish Giri edged out Vietnam’s Liem Quang Le 3.5-2.5 via the tie-breaks after four straight draws.

The Praggnanandhaa-Mamedyarov tie saw the Azerbaijan player take the lead, winning the opening game in 46 moves. A draw followed in the next, before the Indian levelled the match with a 37-move victory.

Mamedyarov, however, turned the tables on the teenaged GM, who has been in good form in 2022, by winning the fourth game to seal the tie 2.5-1.5.

Meanwhile, Duda dominated against Erigiasi, winning the first and third games to go with a draw in the second to secure a 2.5-0.5 victory.

Carlsen plays Erigaisi on the second day (Wednesday), Liem faces So, Mamedyarov is up against Duda and Praggnanandhaa takes on Giri.

The eight players will play a round-robin tournament. The winner will be the player who accrues the most points and cash overall.

Eight players qualified for the Finals after a series of events in the Meltwater Champions Tour. The total prize fund for the Tour finals is $ 210,000. Each win in the round-robin earns the player $ 7,500.