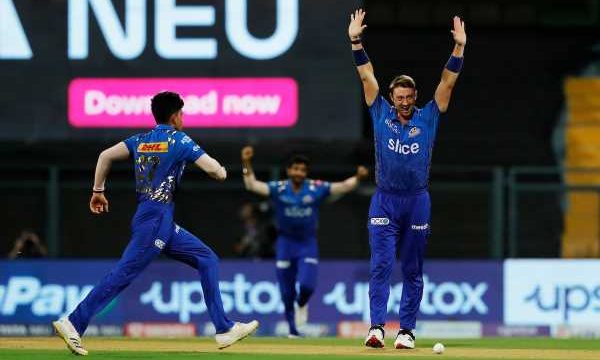 The two most successful teams Mumbai Indians and Chennai Super Kings with nine IPL titles between them are now out of the IPL 2022 play-offs’ contention.

CSK came into Thursday’s game at the Wankhede stadium with very slim chances of a play-offs berth and their hopes were dashed less than 40 minutes after the start of their innings.

CSK were dismissed for their second lowest total in the tournament — 97 all out with Mahendra Singh Dhoni top-scoring on 36 not out off 33 balls.

The MI bowling unit did an exceptional job. There was swing, the pitch assisted some of the slower balls from the pacers.

Left-arm pacer Daniel Sams registered the best bowling figures for Mumbai as he picked three wickets for 16 runs in his 4 overs.

The Aussie speedster exerted his impact in a fiery opening spell. His first over wasn’t short on drama. Sams struck with his second ball when he hit Devon Conway’s pad with a length delivery. Television replays showed the ball was sliding down the leg-side. However, due to the unavailability of the DRS for the first few minutes of the game, Conway had to walk back. 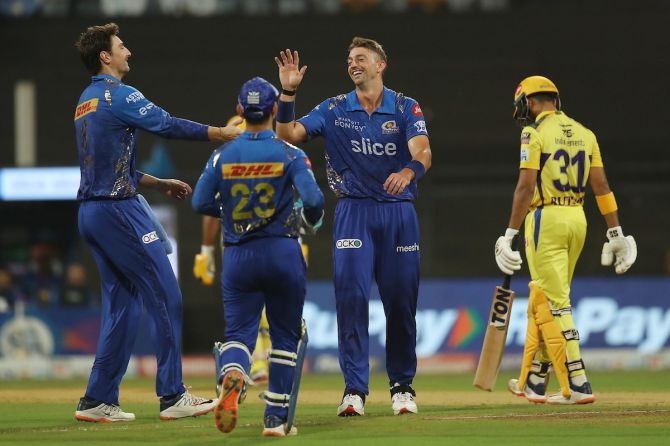 Two deliveries later, Moeen Ali (0) joined Conway in the dugout. Caught in two minds, the Englishman top-edged a short one by Sams and Hrithik Shokeen pouched a well-judged catch.

Mumbai for a change introduced Jasprit Bumrah early in the attack and he dismissed Robin Uthappa in the second over.

Sams struck again in the third over to remove Ruturaj Gaikwad (7); the in-form opener edged one down the leg-side and was caught by wicket-keeper Ishan Kishan. CSK 5 for 3.

Ambati Rayudu (10) stayed for 14 deliveries, struck two fours — one off Bumrah, gliding a length ball pitched on off-stump past short third man; the second off Riley Meredith with a superb backfoot square drive, before getting out to a fine delivery, edging back to an inswinger.

At the end of the Powerplay CSK had lost half the side (29/5) and were in danger of being bowled out for their lowest IPL total, but Dhoni’s lone warrior act lifted CSK to 97 in 16 overs.

Riding on Tilak Varma’s unbeaten knock (34 off 32), Mumbai registered a morale-boosting win over their arch-rivals and confirmed CSK’s exit from IPL 2022 play-offs contention.