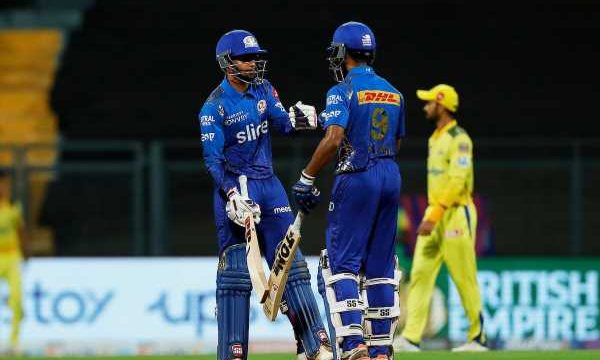 Mumbai Indians were chasing only 98 to knock Chennai Super Kings out of the race for the play-offs, but they got off to a horrible start too.

What seemed like an easy target to chase for MI was challenged by CSK bowlers Mukesh Choudhary (3/23) and Simarjeet Singh’s (1/22) fiery opening burst of four overs each to give their side a chance.

MI lost opener Ishan Kishan on just 6 as Choudhary got the better of him the second time this season. After Skipper Rohit Sharma was dismissed on 18 by Simarjeet, Chennai kept taking wickets to put the pressure on Mumbai.

In a low-scoring cliff-hanger, Choudhary, who dismissed Ishan Kishan in the first over, then removed Daniel Sams and debutant Tristan Stubbs. By the end of the 5th over, MI had collapsed to 34 for 4 with two youngsters Tilak Varma and Hrithik Shokeen in the middle.

Nineteen-year-old Tilak has been a rare shining light in MI’s forgettable campaign and Mumbai’s leading run-getter in IPL 2022 played a counter-attacking knock to rescue his team in the low-scoring humdinger.

After seeing off Mukesh and Simarjeet who bowled out their quota in the first eight overs, Varma and 21-year-old Hrithik Shokeen batted sensibly to stitch a 48-run partnership for the fifth wicket, extinguishing CSK’s hopes.

Both batters batted sensibly, mostly dealing in singles and doubles, but not hesitating to hit the occasional boundary as they took Mumbai to 81 before Shokeen (18) fell, succumbing to an unnecessary rush of blood. He jumped out of the crease to a delivery by Moeen Ali that turned big, avoided the bat and rattled the stumps.

Tilak remained unbeaten on 34 off 32 balls as Tim David finished off the game with a six.

Mumbai won with 31 balls to spare, only the five time IPL winners’s third win in 12 IPL 2022 games. CSK slumped to their eighth defeat, ending their slim hopes of making it to the last four.