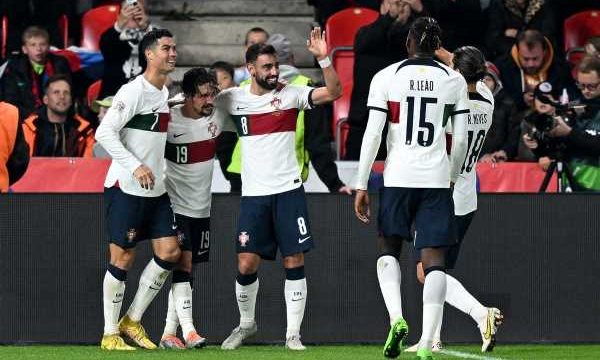 A summary of Saturday’s action in the UEFA Nations League.

Portugal stormed to a 4-0 win over the Czech Republic in their Nations League A-Group 2 match on Saturday thanks to a Diego Dalot double and strikes by Bruno Fernandes and Diogo Jota.

The victory sets up a crunch clash for the Portuguese on Tuesday at home to Spain, who lost 2-1 to visitors Switzerland, knowing a draw will be enough to reach the final four.

Portugal lead the group on 10 points ahead of Spain on eight after five matches with one game left to play.

“It’s a unique feeling to be able to help my country,” said Dalot.

“We knew it could be a difficult game if we hadn’t started with the right attitude.

“We started the game very well, controlling the ball, and after the goals the spaces started to open up a little… Congratulations to everyone, we really deserved this victory and now it’s time to recharge our batteries.” Ronaldo needed treatment early on after a being caught in the face by goalkeeper Tomas Vaclik but soldiered on.

The Portuguese controlled possession and opened the scoring in the 33rd minute when Rafael Leao swung a cross into the area and Dalot fired past goalkeeper Tomas Vaclik.

Ronaldo missed a chance to double the lead before Fernandes put the visitors further ahead in first-half added time when he surged into the box and converted a cross from close range.

Ronaldo then conceded a penalty for handball but Patrik Schick blazed the spot kick over the bar just before the break.

Dalot netted his second goal soon after the interval with Jota rounding out the scoring in the 82nd minute to leave the 2019 winners in pole position to reach the semi-finals. 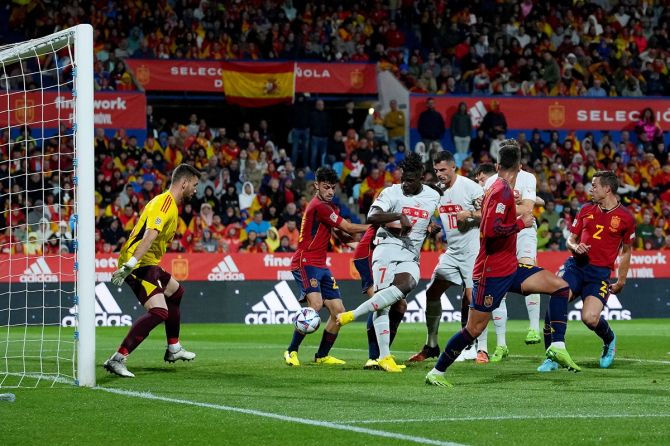 Spain suffered a 2-1 defeat by Switzerland as goals from Manuel Akanji and Breel Embolo knocked the hosts off the top of Nations League A-Group 2 with one game left to play.

The Swiss held firm against last year’s finalists for most of the game and handed their rivals only their second home loss in almost 20 years and their first in Spain since 2018.

The Spaniards are now in second place on eight points, having been leapfrogged by Portugal, who breezed past Czech Republic 4-0 away to reach 10 points.

Cristiano Ronaldo’s side will make the final four with at least a home draw in Tuesday’s crunch game against Spain, who must win in Braga to qualify for the semi-finals.

Switzerland are third on six points, two above than Czechs who they will face on Tuesday in a battle to avoid relegation. Akanji opened the scoring with a header from a corner in the 21st minute, but Jordi Alba equalised for the hosts with a cross-shot from a counter-attack 10 minutes after the break.

Three minutes later, however, Embolo got the winner with a close-range strike from a corner after Akanji flicked the ball towards the six-yard-box where the striker turned it into the goal.

“We played against rivals that were really aggressive, pressing, physically very strong, who prevented us from playing our style of soccer,” Spain coach Luis Enrique told TVE.

“We were not on target, really erratic, the worse I can remember since I’ve been coaching this team. “We need to fix that because now we have a final at Portugal. We need to go there and win. There is no other way.”

Despite having 70 percent possession, Spain lacked energy for most of the match and barely posed a threat to Yann Sommers goal until Alba scored with their first shot on target.

The Swiss were comfortable sitting back and waiting for a pedestrian Spain who were unimaginative on an uninspired night for their highly-rated Barcelona midfielders Pedri and Gavi.

It was not until very late in the second half that the hosts created chances but they were kept out by Sommer who made two critical saves to deny substitutes Marcos Llorente and Borja Iglesias.