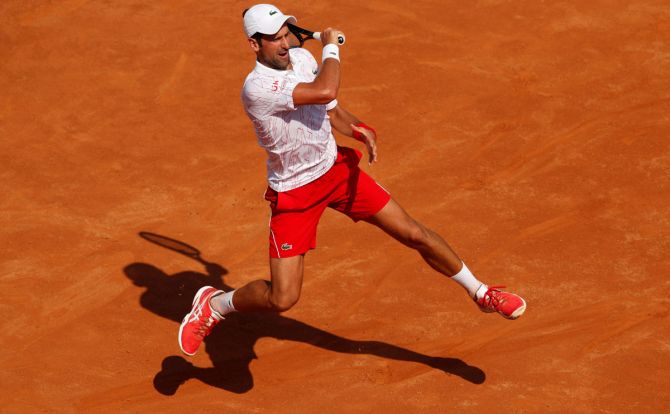 Novak Djokovic turned the page on his contentious US Open exit and began his claycourt season with a convincing 6-3, 6-2 victory over wildcard Salvatore Caruso in the second round of the Italian Open on Wednesday.

The world number one was disqualified in New York after accidentally hitting a line judge with a ball during his fourth round match against Spain’s Pablo Carreno Busta.

Djokovic’s frustration boiled over after dropping his serve against Carreno Busta in the opening set at Flushing Meadows but 10 days on in Rome he did not face a single break point in an imperious display against the unseeded Caruso.

“Obviously I had an early exit (at the US Open) so had more time to prepare,” Djokovic said courtside. “I did practice for a week now and tried to play some sets coming into this ATP 1000 match.

“Caruso is a claycourt specialist and it was a great challenge today.”

On arrival in Rome, an apologetic Djokovic vowed to be “the best version” of himself on and off the court and he kept his emotions in check against local hope Caruso. 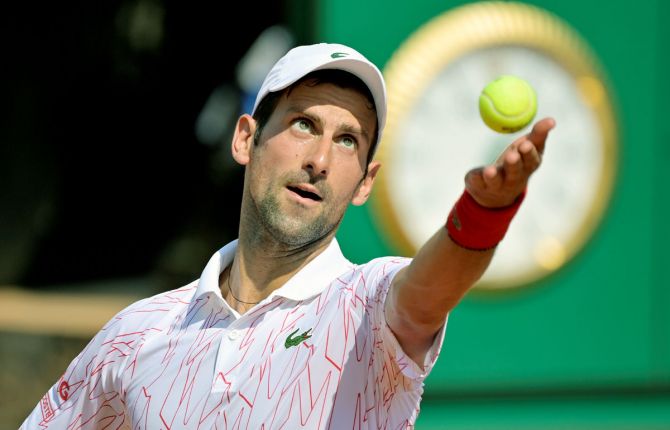 Four-times Rome champion Djokovic, who received an opening-round bye, broke Caruso’s serve in the eighth game before serving out the opening set.

Caruso, who battled past American Tennys Sandgren in the opening round for his first ATP Masters 1000 match win, dropped his serve in a see-saw third game of the second set which lasted nearly 12 minutes.

With momentum firmly on his side, top seed Djokovic broke his opponent for a third time in the match before celebrating victory by blowing kisses into the empty stands at the Foro Italico.

Having recorded 51 victories in 60 matches, Djokovic is the second most successful player in the tournament’s history – just behind nine-time champion Rafael Nadal.

Djokovic has won 27 of his 28 matches this year and will resume his hunt for an 18th Grand Slam title at the French Open, which begins on September 27.

“My best results have come on hardcourt but I enjoy competing on clay,” said Djokovic. “It’s a demanding surface where you have to be patient and construct your points.”

Djokovic will face either fellow Serb Filip Krajinovic or Italian Marco Cecchinato for a place in the last-16. Top seed Simona Halep overcame a couple of hiccups in her first match at the Italian Open in Rome to beat wildcard Jasmine Paolini 6-3, 6-4 to move into the third round on Wednesday.

The 28-year-old Wimbledon champion has only lost twice this year but found herself a break down in both sets before she recovered to seal her first victory since winning the Prague Open a month ago.

World number two Halep, who had skipped the US Open due to COVID-19 concerns and opted to stay in Europe and practice on the claycourts ahead of the French Open, looked sluggish at the Foro Italico with 14 winners offset by 15 unforced errors.

“I was a little bit tight at the beginning, it was tough to get a rhythm in the whole match,” Halep told reporters. “It’s always tough in the first match of the tournament and she played really well.

“I felt like I played very well when needed. Mentally, I was very strong and I didn’t give up at all and I wasn’t upset on court. I’m trying to improve in that direction and today it was a big plus.”

Halep had received a bye into the second round but was far from her best on serve and was broken five times in the match.

However, Paolini was also let down by seven double faults in the match while both players struggled to win games on serve, with six consecutive breaks marking the early stages of the second set.

She switched gears late in the second to take the game away from the Italian, who was playing a top 10 player for only the second time in her career, as Halep finished the match after converting her eighth break point.

Halep, twice a runner-up in Rome, will next play either Dayana Yastremska or Amanda Anisimova in the next round.