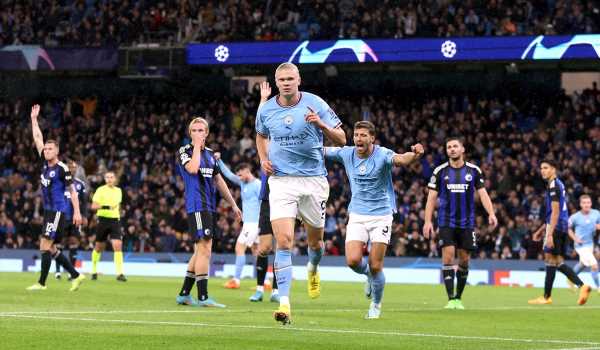 A round-up of Wednesday’s action in the UEFA Champions League.

Erling Haaland took his goal tally to an incredible 19 in all competitions this season with another double in Manchester City’s 5-0 demolition of FC Copenhagen in Champions League Group G on Wednesday.

Haaland wasted no time in getting City going with yet another strike in his remarkable campaign, sweeping home an early opener, before putting the game beyond the Danish side inside 32 minutes.

City kept coming and added a third six minutes before the break as David Khocholava put through his own net, with Haaland lurking just behind in the hunt for his second treble in four days.

There was to be no hat-trick for Haaland as he was withdrawn at half-time, but the goals kept coming as Riyad Mahrez slotted home a penalty before Julian Alvarez finished things off with a late fifth.

The most comfortable of victories ensured City have taken a maximum nine points in the group and need two more to be sure of a spot in knockout stages. Copenhagen are bottom on one point from three games.

“Erling Haaland just wants to win the game, hat-tricks are not everything,” City coach Pep Guardiola told reporters. “We need to have everyone involved. I know the problems we have now — Kyle Walker is out for a long while — but we can rely on players off the bench like Rico Lewis, even though he is only 17. There may have been some sleepless nights among Copenhagen’s defenders after Haaland bagged his third hat-trick since joining City in the close season against Manchester United on Sunday.

It took seven minutes on Wednesday for their nightmares to become a reality in the Manchester rain, as Haaland hammered home Joao Cancelo’s pull back.

The Norwegian was then in the right place at the right time to convert the rebound after Sergio Gomez’s shot had been saved.

Since failing to score or assist for Borussia Dortmund against City in April, 2021, Haaland has since been directly involved in 41 goals in his last 23 home appearances at club level, with 35 goals and six assists.

If it were not for former Liverpool academy goalkeeper Kamil Grabara, Haaland would have had a first-half hat-trick, and City could have been on course for a record win, given the amount of shots they had in the opening period.

They had to make do with one more before the break, Khocholava’s own goal, with Mahrez stepping up to get in on the action from the spot early in the second half, following a foul on Aymeric Laporte in the penalty area.

Alvarez’s third goal for City in all competitions was the icing on the cake, with the hosts wasting chances to make the result even more emphatic.

City have scored 20 goals in their last five games, all wins, a sign Pep Guardiola’s team are hitting top gear.

Chelsea back on track after trouncing Milan Chelsea got their Champions League campaign back on track in emphatic style when they brushed aside AC Milan with a dominant 3-0 home win thanks to goals from Wesley Fofana, Pierre-Emerick Aubameyang and Reece James.

Chelsea lost 1-0 to Dynamo Zagreb and drew 1-1 at home with Salzburg in their opening two Group E games but are now right back in the mix on four points, one behind Salzburg, who beat Dinamo Zagreb 1-0 earlier on Wednesday. Milan, who host the Londoners next week, also have four, with Zagreb on three.

The Italian seven-times champions will have to find a lot more in the San Siro than they showed in London if they are to have a good chance of advancing to the knockout stage for the first time since 2014.

Chelsea, by contrast, will travel full of confidence after rediscovering their swagger following their insipid opening games and though they still look a long way from the side who lifted the Cup in 2021 they were solid throughout and finished clinically.

They took a while to settle on Wednesday but gradually began to exert control as Mason Mount had a shot pushed wide and Thiago Silva went close with two headers from corners.

Inexplicably, the Brazilian was left unmarked for a third and though his powerful header was beaten out by stand-in keeper Ciprian Tatarusanu, after an ensuing scramble Fofana calmly tucked the ball into an inviting gap to make it 1-0 in the 24th minute.

Milan were muscular in their running but lacked guile and precision and failed to create a worthwhile chance until first-half stoppage time when Rade Krunic blazed over –– put off by a great last-ditch lunge by Ben Chilwell – after Kepa Arrizabalaga had saved from Charles de Ketelaere following a driving run by Rafael Leao.

It proved their high-water point of the night as in the 56th minute former Chelsea centre back Fikayo Tomori failed to cut out a near-post James cross and Aubameyang had a simple task to guide it home.

Five minutes later it was all over when James was again left unmarked on the right to run on to a Raheem Sterling pass and lashed an unstoppable third goal into the roof of the net.

PSG held at Benfica after Pereira own goal Paris St Germain were held to a 1-1 draw at Benfica after an own goal by midfielder Danilo Pereira cancelled out Lionel Messi’s superb strike in Champions League Group H.

The ball glanced off Pereira into the net in the 41st minute after Benfica forward Goncalo Ramos tried to head home but narrowly missed a cross by midfielder Enzo Fernandez.

Messi had given PSG the lead in the 22nd minute with a brilliant curling shot following an assist by Neymar.

Neymar hit the woodwork in the 49th minute with a bicycle kick and had a long-range free kick saved by Benfica keeper Odysseas Vlachodimos.

PSG midfielder Fabian Ruiz came close to scoring a winner in the third minute of added time but his half-volley went narrowly above the bar.

PSG lead the group on seven points, level with second-placed Benfica, with Juventus third after earning their first three points with a 3-1 home win over Maccabi Haifa.