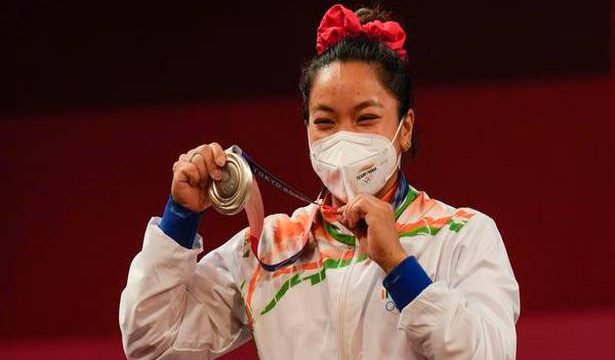 Chanu ended India’s 21-year wait for a weightlifting medal at the Olympics.

President Ram Nath Kovind on July 24 congratulated Mirabai Chanu for winning a silver medal in weightlifting in the Tokyo Olympics.

“Heartiest congratulations to Mirabai Chanu for starting the medal tally for India in the Tokyo Olympics 2020 by winning silver medal in weightlifting,” Mr. Kovind tweeted.

“Could not have asked for a happier start to Tokyo2020! India is elated by Mirabai Chanu’s stupendous performance. Congratulations to her for winning the Silver medal in weightlifting. Her success motivates every Indian,” Mr. Modi tweeted with the hashtag Cheer4India.

Sports Minister Anurag Thakur and his predecessor Kiren Rijiju too congratulated the weightlifter for bagging a medal for India on the first day of the competitions. "India’s 1st medal on day 1 ! @mirabai_chanu wins SILVER in women’s 49kg weightlifting! India is so proud of you Mira !," Mr. Thakur wrote on his twitter handle.

India’s lone Olympic gold medallist and former shooter Abhinav Bindra too took to the social networking platform to wish Ms. Chanu. "Many many Congratulations to @mirabai_chanu on winning India’s first medal at #Tokyo2020. Such An inspiring performance that will be remembered for a long time to come and will inspire generations. Well done."

Mr. Shivalingam said he got emotional while watching Ms. Chanu create history. "History create ho gaya. Itna aasan nahi hota (History has been created. It was not easy), it is a very very big thing. I had tears in my ears. It will be difficult for anyone to emulate this performance," he said.

"MIRABAI CHANU! Absolutely amazing display of weightlifting. The way you have transformed yourself after your injury and clinched a historic silver for #TeamIndia is absolutely stupendous," Mr. Tendulkar tweeted.

"Ghazab. Bhartiya Naari Sab par Bhaari. #MirabaiChanu, remember the name. Thank you for making us all proud @mirabai_chanu, and winning us a Silver at the Olympics. Many more to come. #Tokyo2020," wroteMr.  Sehwag, known for his witty tweets.

"Congratulations #MirabaiChanu on making us proud and bringing us glory. Our first medal at the #TokyoOlympics2020 , a Second place medal in the Women’s 49kg weightlifting . Super Proud," Mr. Laxman said.

Ms. Chanu, 26, ended India’s 21-year wait for a weightlifting medal at the Olympics by clinching the silver medal in the 49 kg category to open the country’s account in Tokyo on July 24.