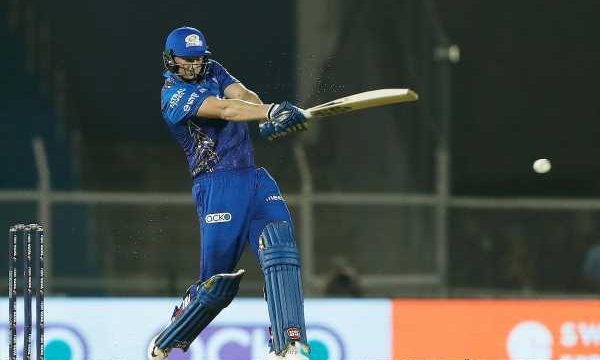 Mumbai Indians skipper Rohit Sharma termed Friday’s victory over Gujarat Titans, at the Brabourne Stadium in Mumbai, as ‘very satisfying’, as his side was 15-20 runs short.

Fine bowling by Murugan Ashwin (2 for 29) and Daniel Sams, in the last over, after solid knocks by Rohit Sharma, Ishan Kishan, and Tim David, helped Mumbai Indians beat Gujarat Titans by five runs.

“It was pretty tight towards the back end. Very satisfying, something we were looking for all this while. Luck has to turn at some stage; we’ll take that win with both hands.

“Credit to everyone. We were 15-20 runs short. The way we started, we got stuck in the middle. They bowled well in that situation,” said Rohit, at the post-match presentation.

He lauded Singapore-born Australia-raised power-hitter David, who smashed a stunning 44 not out off 21 balls to help Mumbai post a fighting 177 for 6.

“Tim David finished things really well. We knew it would be tough, but we held our nerves and that was good to see. A lot depends on how the game is going, who’s bowling well on the day.

Luckily, I had few resources so I could change-up. They bowled slower balls and it was difficult to hit. We wanted to do the same. We did that pretty well. It was a great effort from the bowling unit,” he added.

Rohit also praised Sams, who conceded only three runs in a nail-biting final over.

“We didn’t want to look too far ahead. Even today, we didn’t play our best cricket. A lot of credit to the bowlers at the back-end. It’s important to back the skills you have.

“Sams was under the pump in a couple of games but I know the quality he has. It’s important to back those guys. We are trying to maintain the same squad how much ever possible. Sams was brilliant.”

Gujarat suffered their second defeat in IPL 2022 in 10 matches, while Mumbai Indians, out of the reckoning for a berth in the play-offs, are still at the bottom of the 10-team league table after their second victory.