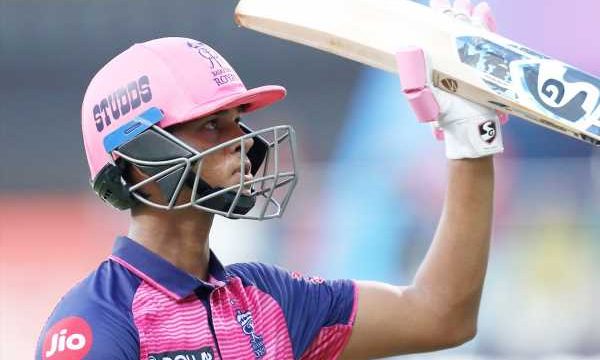 Rajasthan Royals climbed to third place in the points table with a fabulous chase in a six-wicket win against the Punjab Kings in their IPL 2022 match at the Wankhede Stadium in Mumbai on Saturday, May 7, 2022.

It was the first win chasing for Royals this season and Yashasvi Jaiswal’s fifty spearheaded it.

Jaiswal was dropped from the team after he scored only 25 from three innings. But the young opener, who lost his place in the side, was at his fluent best, showed why the franchise has so much faith in him.

He is one of the three players the Royals retained ahead of the mega auction, Sanju Samson and Jos Buttler being the others. That is an exclusive club.

When RR came out to bat, they knew they needed a good start and that is exactly what they got from Jaiswal and Buttler. Jaiswal, who replaced Karun Nair, began fiercely by slamming two fours through cuts on the off-side and a glorious picked-up six over deep square leg. Buttler joined the attacking party in the fourth over, launching Kagiso Rabada for a six over deep midwicket. He followed it up with three fours — carving one through extra cover, a lap-pull over short fine leg while in air and smoked through cover.

But Rabada had the last laugh, having Buttler caught at short third man. The orange cap holder was trying to go for one shot too many, but his 30 off 16 balls set the tone of the innings. The Buttler-Jaiswal duo put on 46 for the first wicket in just 3.5 overs.

Skipper Sanju Samson (23 off 12) took over the attacking mantle after Buttler’s fall, finding luck in getting fours through edges twice while nailing other boundaries with sheer timing through point and cover. But his stay at the crease ended when he miscued to long-off off Rishi Dhawan.

Jaiswal, meanwhile, kept going with his flawless batting, heaving a four over Sandeep Sharma’s head and produced a stunning inside-out lofted six over extra cover off Rahul Chahar. Sharma came under from the left-handed batter again when he carted back-to-back fours — slapping over long-off and playing a silken late cut through third man, and kept the momentum in Rajasthan’s favour.

RR made a difficult chase look easy with a splendid batting effort.

Jaiswal reached his second IPL 50 in 33 balls. He then followed it up with three fours off Dhawan in the 13th over — a smack over long-on, scoop flying over short third man and nailing drive past cover.

After taking another four through reverse sweep off Chahar, Jaiswal tried to take over Arshdeep Singh, but holed out to long-off, breaking the 56-run stand.

Despite Devdutt Padikkal struggling to get going, Shimron Hetmyer with a 16-ball 31 ensured that Rajasthan chased down the total to successfully break their two-match losing streak and keep themselves in the hunt for a spot in the playoffs.