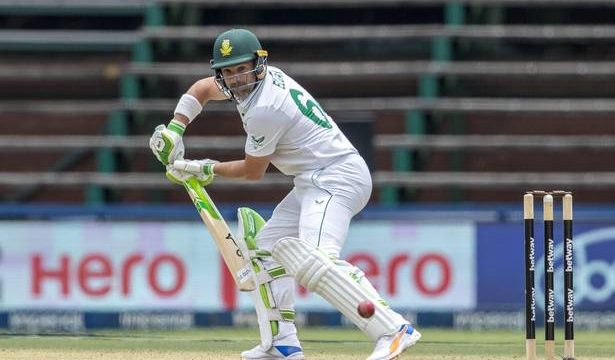 He doesn’t make a pretty sight at the crease. Dean Elgar took blows on the body on a pitch of uneven bounce but stayed on displaying a heart larger than his frame.

The tenacious southpaw, playing a skipper’s knock. was unbeaten on a blood and guts 46 and South Africa, pursuing 240, was 118 for two at stumps on the third day of the second Freedom Test at the Wanderers on Wednesday.

The contest in the middle was often brutal. A nasty Bumrah short-pitched ball struck Elgar on the helmet grill.

Thakur, the only bowler to target the crack consistently, got one to rear and hit Elgar on the knuckles. Elgar fought on.

South Africa began the chase briskly with Aiden Markram impressing with a string of shots the finest being a cover-drive off Mohammed Shami.

Markram looked threatening but Thakur trapped him leg-before with an incoming delivery that hit the crack and kept low.

Keegan Petersen batted with timing and flow, cover-driving Bumrah and pulling Mohammed Siraj but R. Ashwin, using the crease cleverly, got him with one spinning into the right-hander who went back.

Earlier Hanuma Vihari – 40 not out off 84 deliveries – came up with an innings of great significance.

He walked in at the fall of Ajinkya Rahane’s wicket – the total was 155 for three – and stayed put till India was dismissed at 266.

Along the way, Vihari built crucial little partnerships, playing second fiddle to an aggressive Thakur and then unleashing his strokes – the drive, the pull and the cut – when the last man was at the crease.

It is the solidity of his back-foot and a tight defence that makes Vihari such a combative player on these pitches. When he strikes the ball, he does so with footwork and balance.

Earlier, two battle-scarred soldiers put up a stand. Cheteshwar Pujara (53) and Rahane (58) were under pressure.

Pujara, shrugging away the fear of failure, adopted a new, bold approach. His was a calculated counter-attack on a seam-trap.

Pujara drove, cut and pulled with the sort of fluency we have not seen from him for long. He was also more upright in his stance to counter the bounce.

Rahane batted with aggression too.

He is such a sweet timer when he drives. Rahane also essayed an incredible cut for a six when Marco Jansen pitched one short.

Rahane’s horizontal bat shots are his ally on these pitches.

When introduced, Kagiso Rabada began with a vicious short-pitched ball. He immediately signalled for a short-leg.

Rahane responded by driving Rabada between point and cover. This was an engrossing Test match duel.

Rabada would have got Rahane. on 43, with a lifter, but Markram, in the cordon, reacted late.

Eventually, a brutish delivery of bounce and away movement from Rabada ended Rahane’s tenure.

The third wicket had added an invaluable 111 runs.

Rabada, bowing with venom, sent back Pujara too, bringing the ball back.

Rishabh Pant, struck on the helmet grill by a lifter from Rabada perished to wild swipe off the next ball; between the deliveries, van der Dussen riled up Pant with chatter from short-leg.

Ashwin, looked in good touch, but Ngidi got him nicking one down the leg-side, Thakur (28 off 24), produced a blaze of shots, the best being an immaculate straight-drive off Jansen.

Then Vihari, ever the fighter, prolonged India’s lead. Will it be enough?