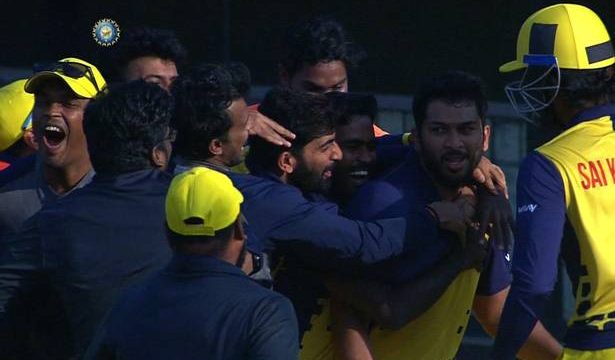 Karnataka had posted 151 for 7 in the final in Delhi

It came down to five runs needed off the last ball in the final of the T20 Syed Mushtaq Ali Trophy at the Feroz Shah Kotla in Delhi. Nothing less than a big hit across the ropes was needed for Tamil Nadu to clinch the trophy and M. Shahrukh Khan did just that, smashing the ball over deep square leg off Karnataka left-arm seamer Prateek Jain.

A delirious Shahrukh charged towards his team-mates the moment the ball left the bat, as Tamil Nadu took the trophy for the second consecutive time.

Sixteen runs were needed off the final over when R. Sai Kishore took strike. A lucky boundary off the first ball, to third man, brought it down to 12 off 5 balls. Shahrukh trusted his partner enough in handing him the strike when a single was on offer. But crucially, Shahrukh, considered to be one of the best finishers in domestic cricket, ensured he had the strike when it mattered the most.

In pursuit of Karnataka’s 151 for 7, the chase was initially anchored by N. Jagadeeshan, who scored 41. But Karnataka pulled things back in the middle overs by taking wickets and slowing the run rate. Tamil Nadu captain Vijay Shankar couldn’t convert his start and fell for 18.

Shahrukh came in after Jagadeeshan’s dismissal and eased the pressure with two sixes. He finished with an unbeaten 33 off 15 balls, fetching him the Player of the Match award.

Earlier, left-arm spinner Sai Kishore restricted Karnataka with figures of 3 for 12 from his four overs, claiming all top order wickets. Abhinav Manohar (46), Praveen Dubey (33) and J. Suchith (18) revived Karnataka to take the score past 150. Ultimately, it wasn’t enough to stop Tamil Nadu from claiming their third title, the most by any team in the competition.