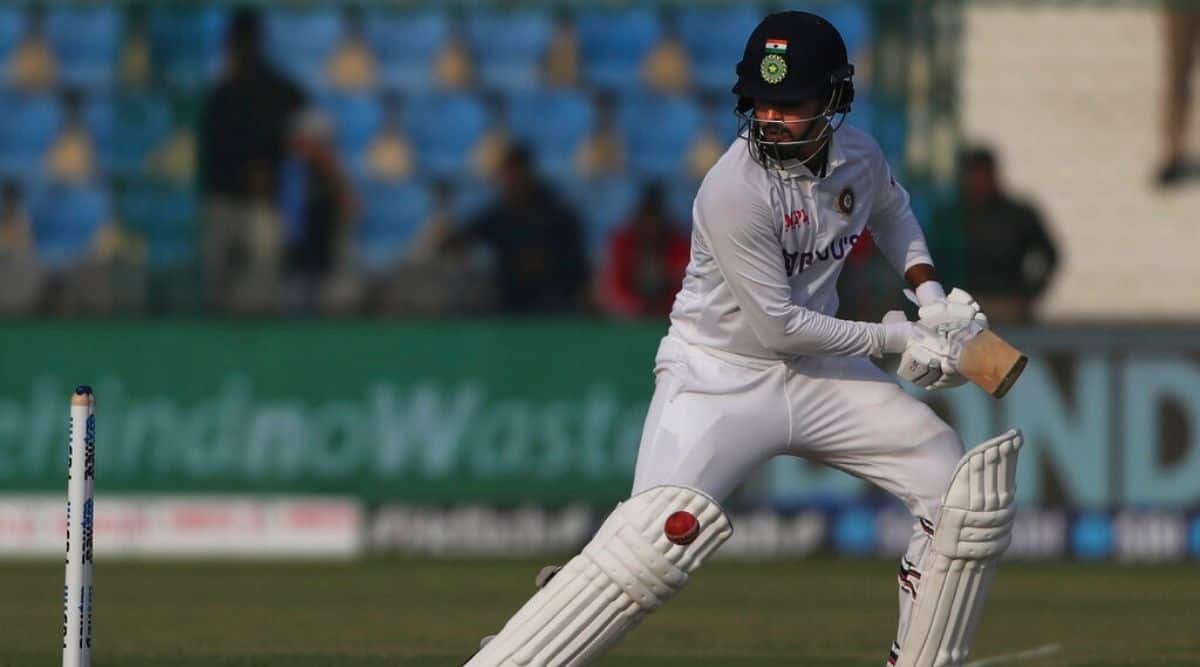 Kanpur is a city obsessed with heroes. In the precincts of the railway station, there still hangs the billboards of Amitabh Bachan from the movie Coolie, which was shot in the city. At the entrance to the city, a large poster of Neeraj Chopra winks. Almost every crumbling red-tiled wall in the city has a familiar heroic face peering at you. But, at the Green Park, it seemed like a day of nearly heroes, before debutant Shreyas Iyer burst forth as the new Indian batting hero, pouncing into the act like a hero in times of a crisis and stealing the limelight on a sunny but balmy day.

Joining Ajinkya Rahane at the departure of Cheteshwar Pujara, for a belaboured 26 off 88 balls, and Shubman Gill for a stroke-full 52, India slipping to 103/3 after lunch, he adequately illustrated his judgement and adaptability to this level of cricket. Though Ajinkya Rahane perished midway through a cruising partnership, Iyer continued India’s recovery act with a defiant, unbeaten 75, ensuring that the team ended the day on a rosy total of 258/4, one that seems already daunting on a pitch with variance in bounce on the very first day.

Iyer’s was an innings of two halves. The second half was racy and exciting; the first was tentative and fortuitous. But it’s the virtues that he exhibited in the first part that might nourish his Test career to bloom. Understandably, his nerves frayed, manifesting in leaden feet and hard hands at the start. Fifth ball of his innings, with not a run on his ledger, he looked to loft Ajaz Patel out of Kanpur, but was fortunate that the resultant edge just eluded a back-pedalling Kane Williamson at long-on. Shortly, he played and missed a few Kyle Jamieson balls, tentatively stabbing at the ball.

But he did survive through that time of tumult. Rahane deserves a bit of credit in shepherding him. Every time, he was beaten or stroked a crisp stroke straight to the fielder, he would walk up to him and allay his worries. Like an obedient disciple, he would keep nodding his head. He then steeled himself to not even imagine attempting an impetuous stroke. He wore a web of caution around him, attempting nothing silly, even if New Zealand tempted him with half volleys outside the off-stumps and width. But he resisted the temptations, even though Rahane began to expand, and eventually misjudged the bounce of a Jamieson ball and chopped it onto the stumps. This was the best Rahane had looked in recent times, but for that moment of indiscretion that pushed India to 145/4.

But Iyer remained unswayed. There is a certain way you expect Iyer to bat, based largely on how he bats in white-ball cricket. There is a streak of insouciance about him, a sprinkling of flashiness that borders on recklessness. His percentage strokes are the slashes over covers, the swipes past point, the upper cuts and slogs. But he tore all those perceptions, thus demonstrating that he has other gears in his saddle, the stomach for a fight, the mind for attrition and a sense of opportunism. He seemed to come into the Test match with a vivid grasp of this format’s requirements, with a sense of game awareness a lot of cricketers take years to develop. Iyer the red-ball batsman seemed antithetical to Iyer the T20 batsman.

He was quick to eradicate his mistakes too. So, after he was squared up by off-spinner Will Somerville’s away-spinner, he narrowed his stance, and looked to play him from a more side-on position. When facing Jamieson, he cut down his shuffle, so as not to get caught on the move, if he curled one viciously back into him, enhancing the lbw risk. As the nerves eased out, his hands became less stiff and his feet discovered its rhythm. He also didn’t let those close calls —the edge that fell short of Williamson, the dropped leg-side catch or the outrageously close lbw — gnaw at him, a testimony to his temperament.

Just at this time, New Zealand exposed their own debutant Rachin Ravindra to him. Iyer relished the opportunity of facing a rookie part-time spinner, and took him on. In a typical old-fashioned subcontinental method, once a trademark of the Mumbai school of batsmanship, he danced down the track and lofted him over extra-cover.

He was unabashed in using his feet to to left-arm spinners and smear them over cover. Most batsmen, even those from the subcontinent, prefer hitting from the crease these days. He then stepped out and carved Patel over extra-cover, and when he dropped the length ever so slightly, late-cut him off the stumps, much like his coach Rahul Dravid in his pomp. Later in the innings, an even better shot was executed against Patel, this time charging down the track and cracking him against the turn over mid-wicket. The Kanpur crowd reserved their most piercing applause for this stroke.

Towards the end of the day, applause of similar decibels reverberated in the stadium, as Ravindra Jadeja shed his inhibitions, exploiting the fatigue of New Zealand’s bowlers. It was not a long, hot day in the sun, but it was a day when they had come so close to grabbing the honours, but failed to. He brutalised Sommerville over mid-wicket, after blasting Jamieson through covers. But like Iyer, he was watchful early on in their unbroken association of 113 runs. A potentially match-defining alliance.

The Green Park crowd instantly fell in love with Iyer, with chants of “Iyer, Iyer…” filling the crisp evening air. Iyer waved his bat at them when he walked back, and they went delirious, thronging the walls that demarcates the open stands from the pavilion. Kanpur has discovered a new hero to adorn its walls.