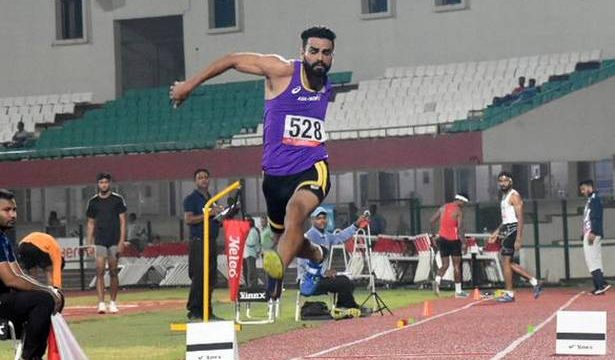 As triple jumper Arpinder Singh took his warm-up jumps at the Nehru Stadium here for the 60th National Open which begins on Wednesday, his coach P.B. Jaikumar watched him closely. Arpinder, the Asian Games champion, is returning to competition mode after nearly two years following a knee injury.

“It’s good to get back to competition but this time there is no pressure, there are no high expectations because this is a comeback meet,” the 28-year-old, also the 2018 World Cup bronze medallist, told The Hindu here on Tuesday evening.

“I had a knee injury while training back home in Punjab last year and now for the last five months, I have been training with Jaikumar in Thiruvananthapuram. This track is new and has a nice bounce.”

Aprinder has a personal best of 17.17m which came in 2014, a year when he also won the Commonwealth Games bronze in Glasgow. And here there will be Abdulla Aboobacker, the Services champion and this year’s India No. 1 with 16.79m, and another prominent name Karthik Unnikrishnan to push him.

The triple jump battle could be the prime event at the five-day championships. The long jump, with exciting names like Jeswin Aldrin and Muhammed Anees and Yugant Shekar Singh could also produce fireworks.

With billboards and giant screens announcing the event all over the city, Warangal has gone all out to promote the event. But many of the big names are missing here, they are either weary after the long year and the Olympics or are tending to injuries trying to get back stronger for next year, a packed one.

A few Olympians, like quartermilers Muhammed Anas, Arokia Rajiv and shot putter Tajinderpal Singh Toor, had even competed in the Services meet in Bhubaneswar a few days ago but chose to stay away from this season-ending meet.

However there are many, like Muhammed Ajmal, who are looking at this as a golden opportunity. Ajmal, a 100-200 runner, will be making his national debut in the quartermile here.

“This meet offers a good chance, probably a chance to win too,” said Ajmal, who won the Services title with 46.91s recently.

The presence of Summy Kaliravan, who was part of the mixed relay team which won the bronze at the under-20 Worlds in Nairobi last month, and Olympian V. Revathy, should also light up the women’s quartermile. But the big name missing will be Priya H. Mohan, the country’s fastest quartermiler this year who was in sparkling action at the U-20 Worlds.