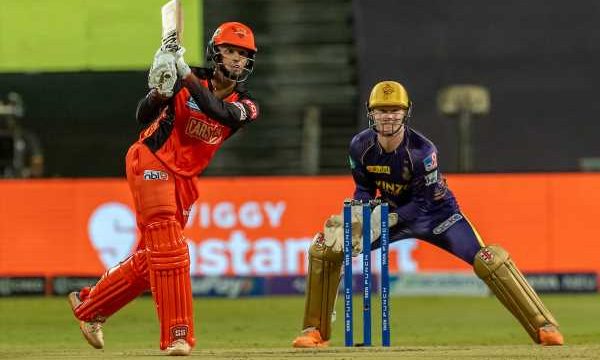 With Kane Williamson misfiring all season, the pressure was on the other Sunrisers Hyderabad batters to chase the 177 target set by the Kolkata Knight Riders on what was a tricky wicket at the MCA stadium in Pune on Saturday, May 14, 2022, night.

For the first few overs, Hyderabad were on track for a successful chase, racing to 30-0. Andre Russell’s introduction into the bowling attack flipped the narrative on its head and Williamson was dismissed for 9 off 15 balls.

While Williamson was struggling at one end of the pitch, his partner Abhishek Sharma had gone about scoring runs meticulously. Following Williamson’s wicket, Sharma looked to form lasting partnerships with Rahul Tripathi.

Theirs was a short-lived stint as Tripathi was sent back by Tim Southee with a spectacular caught and bowled effort in the 9th over.

What followed was the most consequential partnership of the SRH chase between Sharma and the new man in, Aiden Markram. Together, the pair batted through a few overs before Sharma was dismissed for 43 off 28 balls off Varun Chakravarthy’s bowling. The frustration was clear to see when Sharma attempted a pre-meditated slog-sweep which backfired as the ball flew off the top edge and fell into the waiting gloves of wicket-keeper Sam Billings.

From 74-3 in the 12th over, Hyderabad’s lack of batting depth and the pressures of the mounting run rate was evident as SRH fell short by 54 runs, ending at 123-8.

Had the Sharma-Markram partnership materialised and/or had Sharma completed his fifty, spectators would have been witness to a closer contest if not a different outcome to the game.

Markram put up a fight, but by then Hyderabad were in need of 86 runs off 6 overs. Markram missed Sharma to support his endeavours as SRH ran out of steam.