‘Mr. Biden is dealing with a tough situation with the coronavirus. But if he makes a positive statement about the Olympics going ahead, we’d gain strong momentum.’ 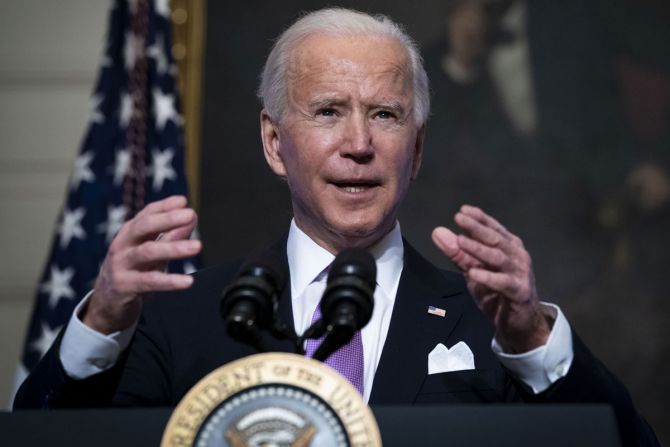 Whether the beleaguered Tokyo Olympics begin as planned this July could come down to support from the United States and its new president, the Wall Street Journal quoted Tokyo Organising Committee member Haruyuki Takahashi as saying in an interview.

The International Olympic Committee and Japanese organisers have been increasingly bullish in recent weeks about the prospect of holding the postponed Games, despite dwindling public support and rising coronavirus cases

However, Takahashi thinks the Olympics’ future could depend on the support of US President Joe Biden, the article said.

“Mr. Biden is dealing with a tough situation with the coronavirus,” Takahashi told the WSJ in the article published on Wednesday. “But if he makes a positive statement about the Olympics going ahead, we’d gain strong momentum.”

“It’s up to the US. I hate to say it, but (IOC President) Thomas Bach and the IOC are not the ones who are able to make the decision about the Games,” he added. “They don’t have that level of leadership.”

The United States brings the largest contingent of athletes to any Olympics and also provides the IOC with its most lucrative television deal.

In response to Takahashi’s comments, the IOC told the WSJ “his comments are obsolete.”

“It is regrettable that Mr. Takahashi does not know the facts,” said the IOC statement.

“First: It is USOPC that decides about the US Olympic and Paralympic team. Second: USOPC has never left a doubt about their participation”

The United States Olympic & Paralympic Committee wrote on Twitter last week that they had not received any information suggesting the Games would not happen as planned.

Takahashi, a former executive at the advertising agency Dentsu Inc, was paid $8.2 million by the committee that spearheaded Tokyo’s bid for the 2020 Games, according to financial records reviewed by Reuters. He has acknowledged receiving the payment but denied any impropriety.

After his involvement in Tokyo’s successful campaign, Takahashi was named to the board of the Tokyo 2020 organising committee.