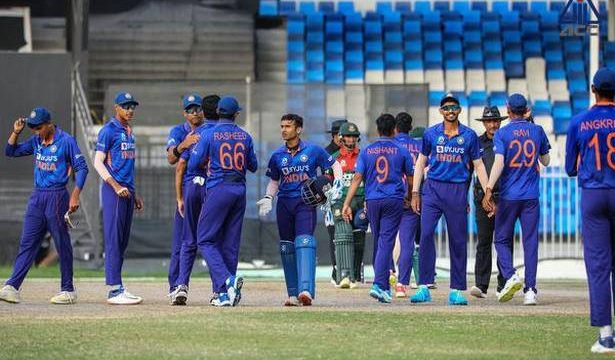 The Indians head into the Under-19 World Cup with a victory in the under-19 Asia Cup.

Head coach Hrishikesh Kanitkar says his side would set short targets when it competes at the Under-19 World Cup, where the past Indian teams have created a rich legacy.

The under-19 World Cup begins in the West Indies on Friday and India begins its campaign with a match against South Africa on Saturday.

"There is a huge legacy since India has done so well in this tournament. It doesn’t help that we have won four times. There is a new team, so you have to start afresh," Kanitkar said during an online media interaction ahead of the marquee event.

"We don’t want to look too far ahead at things like the IPL auction and the Ranji Trophy. What we need to do is to just focus on what we can do in this tournament. We, as a coaching unit, keep them focussed on what they can do in the short term," he added. Asked about playing under difficult circumstances as players are being forced to stay in bio-bubbles, the former India cricketer said it is better to get used to it than complain. "Yes….it is a challenge. What we need to realise is that this is the norm now. It is better to get used to it. It is the reality now, staying in the bubble, The boys will be able to learn from this, after this World Cup also, when they need to stay in bubbles, they will be up for it," he said.

The Indians head into the Under-19 World Cup with a victory in the under-19 Asia Cup and the head coach said it was of great help as the team got to play together.

"It is important because we had not played together as a team. For us, it was important in terms of team building and getting matches under our belt. It has been of great help," Kanitkar said of the win in the U-19 Asia Cup.

The coach emphasised that the team had good fast bowling all-rounders with Rajvardhan Hangargekar of Maharashtra developing well "It augurs well for the future. The talent is there…it is about grooming and handling them well. Rajvardhan is a really exciting prospect and bowls at a fair clip.

"He has a good yorker and a bouncer and he is not a bad batsman. You will find that out in the tournament. He is keen to do well for the team. These are good signs," he said.

Asked what went in favour of Yash Dhull that he got the captaincy, Kanitkar said he had the respect of the players which was important.

"The primary quality is to have respect from the players. I think that is what he has, the respect of the team. He is able to take tough calls.

"Every time, especially while fielding, he can’t be told to do things, he needs to take his decisions. He is up to it. I think his instincts are tuned fine and think he can do justice to the job," Kanitkar added.

The Indian under-19 captain Dhull, who looks up to the Indian Test skipper Virat Kohli, felt it was important to take it game by game.

"The morale in the team was good. It is important to take it game by game and see how to improve game by game. We will keep our intent and take it as it comes," he said.

About the interactions the team had with the legendary VVS Laxman, who heads the NCA now and India’s white ball skipper Rohit Sharma, Dhull said, "They told us about their experiences and that will surely help us in the tournament ahead." The Indian under-19 skipper said the pitches in West Indies were on the slower side.