‘I knew it could be my first T20 hundred but the team goal is more important, hence I took that single’ 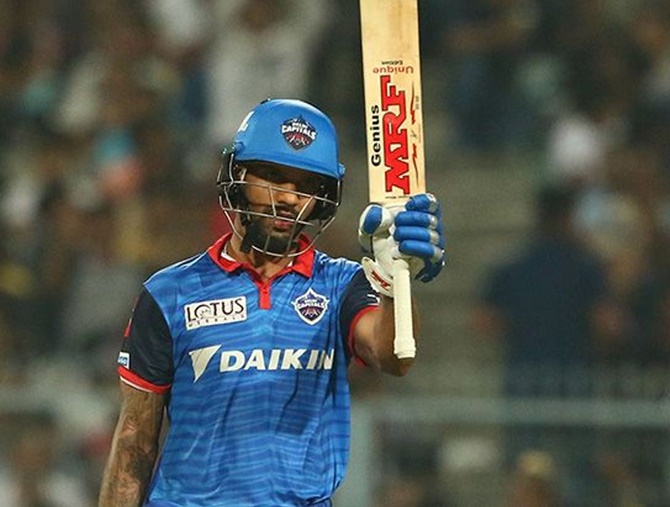 Having roared back to form with a 97-run knock, Shikhar Dhawan, on Friday, said the pitch at the Eden Gardens was better than the one at Delhi Capitals’ home ground.

Dhawan batted through the innings to guide Delhi Capitals to a seven-wicket victory over Kolkata Knight Riders in the IPL in Kolkata. He was however denied his maiden T20 century, as Colin Ingram smashed one into the stands to finish the game in style.

“I knew it could be my first T20 hundred but the team goal is more important, hence I took that single rather than taking a huge risk,” Dhawan said at the presentation ceremony.

Talking about the strip, the India opener said, “It’s totally opposite here compared to Delhi. I was telling Dinesh (Karthik) the same thing. It’s a good wicket to bat on. Good for the bowlers as well as the batsmen, makes it interesting. In Delhi we have to adapt ourselves, hence we got to have that skill.”

Delhi Capitals coach Ricky Ponting had slammed the Feroz Shah Kotla ground staff, who provided the home team with a pitch that proved to be more helpful for the Sunrisers Hyderabad earlier this month.

Dhawan added, “I really enjoyed in the first six overs but I knew I had to stay till the last. I was getting the right thoughts and I had to take the game deep. Rishabh is such a big hitter he can always hit it out of the park.”

Rishabh Pant, who got out after scoring 46, said the plan was to ‘take the game deep’.

“I just try to keep my head clear. When you’re chasing 180, you need to pace the innings in a way that you complete the match in 18-19 overs. We were just talking about taking the match deep and that both of us should remain there till the end,” Pant said.

Pune: An hour after his release from Yerawada prison, undertrial hacked to death