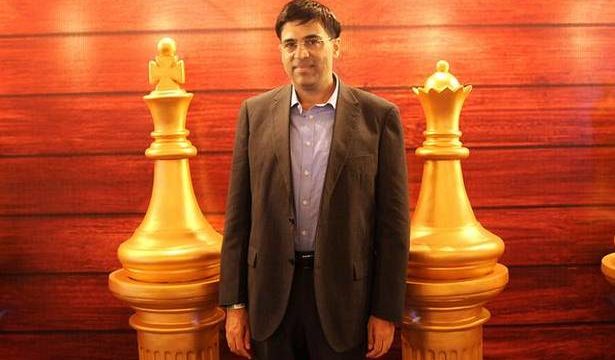 They all stood up and applauded loudly.

Little Akhil must have felt very proud to see his father being honoured like that. His mother, Aruna, had said the other day how proud Akhil was to see his dad on stage at the National Library auditorium.

For Akhil, it was his first visit to a chess tournament. For Viswanathan Anand, too, this was a first in many ways.

Anand had been wearing multiple hats for the past five days. He was brand ambassador of the Tata Steel Chess. He mentored the young Indian players. He aired his comments during the live streaming of the event. He was also a part-time journalist, posing questions to the players at press conferences.

Anand had figured in the first two editions of the tournament here, but didn’t want to play this time as he felt he wasn’t ready.

He, however, didn’t want to miss the tournament. “I told the organisers that I didn’t want to play but would be happy to be present,” Anand told The Hindu.

“We worked out an arrangement and I am very happy to promote this wonderful event.”

And Anand would have been happy with the way his wards performed here. “They are all very strong, creative players,” said the five-time World champion. “They are very young and can grow in unexpected ways. I have been making observations which I can tell them when we work together.”

He felt that the Tata Steel Chess is doing great service to the game in the country.

“It is a top event that gives something for the fans to follow,” he said. “The format gives an opportunity to a lot of youngsters, not just one or two.”