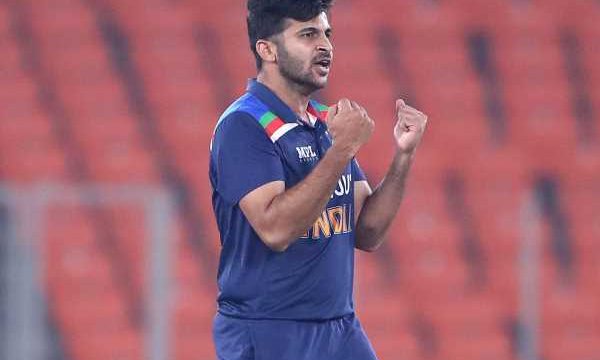 Shardul Thakur was picked over Umran Malik in the first ODI because he adds “depth” to the Indian batting but the Jammu and Kashmir speedster remains very much in the scheme of things for the ODI World Cup at home this year, said bowling coach Paras Mhambrey on Friday.

Mhambrey said both Thakur and Malik add value to the team in different ways.

“That (batting) is one of the reasons why we picked him (Thakur). He adds depth to the batting. We will have to see the surface and decide the combination accordingly. He has performed well for India,” Mhambrey said in the media interaction ahead of the second ODI.

On Malik, Mhambrey said: “The way he has progressed, it is very heartening to see. Pace does matter and adds a different dimension to the attack. The decision of playing him will depend on surface and requirement of the team combination.

“He is very much in the scheme of things as far as world cup is concerned. He adds a lot of value to the team.”

Jasprit Bumrah has been away from the team due to back issues and Mhambrey said the team is missing his services.

“Bumrah is a unique bowler and he is irreplaceable, let’s accept that fact. It is very difficult to replicate his skills. On the order side, it gives an opportunity for others to be tested at this level. We will find out what they bring to the table and how they deal with pressure.”

When asked about Mohammed Siraj, he was all praise for the Hyderabad pacer.

“I have seen him from the India A set up. He did exceedingly well with the red ball. He used to get the ball in but has worked on his seam position to get the ball away. He is a very important member of the team not only for World Cup but beyond that as well.”

New Zealand were able to score 206 runs despite losing six wickets for 131 runs on Wednesday. The bowling coach said the team discussed the issue at length.

“When you score 350 on a surface like that you expect partnerships from the other side, they lost six quick wickets but you expect in a game like that, there will be a partnership, and they bat till 8. Santner is a handy batter as well.

“What is important is you win games, you may be tested. We have charted out things we wanted to focus on and implement in this game. We are not looking at too much experimentation but we need to test players that we have shortlisted.”

Mhambrey added that an early start for the ODI World Cup games at home is something that ICC can look into.

“Ashwin raised a valid point. Dew does play a part in some venues. It depends when and where you are playing. When the ball does get old, it really tilts towards the bating side.

“The spin is not there and makes batting easy. It is something we can look into. The ICC and other members need to take this forward. It is not my call.”