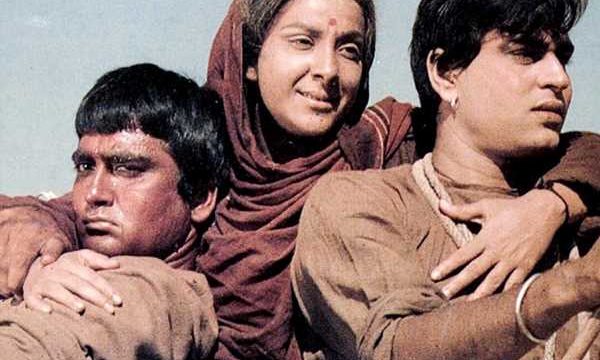 From the time Waheeda Rehman at age 34 got typecast as a mom after playing one to Jaya Bhaduri in Rajinder Singh Bedi’s Phagun, heroines have shied away from playing a mom on screen.

Eight years ago, Bipasha Basu refused to do Aparna Sen’s Hindi film Gulaal because it required her to play mother to a growing boy.

Subhash K Jha looks at actresses who dared play Momma at the risk of getting typecast. She was just 28 years when she played mother to Sunil Dutt and Rajendra Kumar in Mehboob Khan’s epic.

She went on to play the leading lady in Lajwanti, Adalat and her swan song Raat Aur Din (for which she won the National award). Because the heroine had to play mother to Rajesh Khanna in the second half every prominent heroine from Aparna Sen to Waheeda Rehman said no.

Desperate film-maker Shakti Samanta was advised to turn the hero’s double role of father and son into two different parts and cast a much younger actor in the son’s role.

But Shaktida stuck to his guns and cast Sharmila Tagore who had just donned a bathing suit in An Evening In Paris and mom-mom to Rajesh Khanna.

Sharmila didn’t live to regret it. The two went on to be cast as a romantic pair in a dozen blockbusters. When Priyanka ‘generously’ agreed to play a single mother to a 14-year-old girl (Advika Yadav) in this Yashraj Film she insisted on wearing shorts even in the mother-daughter scenes at home.

The screen mom and her daughter ended up looking more like sisters. Maybe that was the whole idea. At 22, Richa Chadha in her debut film agreed to play a 65-year-old mom to Nawazuddin Siddiqui who is older than she.

This was a career risk that could have been permanently damaging for the newcomer. But Richa didn’t care. This is one spirited mom. The world and its favourite critics were at her feet when Manisha at age 24 happily consented to play mom to twin boys in Mani Ratnam’s Bombay.

Manisha confessed she was hesitant. It was her mentor and friend cinematographer Ashok Mehta who convinced her to take the plunge. Thank you, Mr Mehta. It was the kind of casting one had never heard of. And it worked because the two actors doing the unthinkable mother-son act were convinced that the star image is unimportant.

Full marks to Vidya for embarking on a journey that very few actresses would dare to undertake. This was one of her earliest roles as a leading lady. And Hema was warned not to play a widow with an 8-year-old son so early in her career.

Director Ramesh Sippy worked hard on convincing the Dream Girl. She and the film were a hit. Mom to a young son at such a tender age? Tch tch. Not done.

Director Kabir Khan had to do a lot of convincing before Katrina agreed.

She later confessed she was convinced the role was worth attempting as it saw her make a transition from a college student to a wife to a mother. She played a young battered wife with a grown-up daughter played by Raima Sen. And Raveena was rewarded with the National Award for her guts to play mom to a leading lady barely 10 years her junior. Raveena’s only concession to vanity? No grey hair. She played an ice-cold hardboiled career woman and a loveless wife. And mom to a 10 year old.

Cynics said this would damage her prospects as the bubbly effervescent perky Preity. But Preity gave a damn.

Didn’t she play an unwed mother in her debut film? At 30 Tabu played mother to an actor nearly her own age.

Director Mahesh Manjrekar didn’t have to convince her much to take on the challenge. But trade experts believe this premature mother’s role robbed Tabu’s career of its youth.

She was no more qualified to play glam-doll roles. She agreed to play a 12-year-old boy’s mom, but only because Shah Rukh Khan was her co-star.

Who can say no to King Khan? In Siddharth Malhotra’s We Are Family Kareena was stepmom to two growing kids. That was okay. Stepmoms needn’t be motherly in age. She did play a single mother to a teenage son. But then the film’s producer Ramesh Sippy got worried about her image.

Painstaking efforts were made to keep Aishwarya’s motherly status in Kuch Na Kaho a secret until release. Mum’s the word. Though they didn’t share screen space she did play 12-year-old Sana Saeed’s daughter in her second feature film. Quite a risk. Just because she had the author-backed role of a persecuted woman trapped in a rabidly conservative sasuraal, Karisma agreed to play mother to a screen-son.

Otherwise, Karisma said no to all screen-mom roles until her marriage.