Actor-producer Anushka Sharma's Paatal Lok started streaming on Amazon Prime Video on May 15. The series is receiving a lot of positive reviews from the audience as well as the critics. 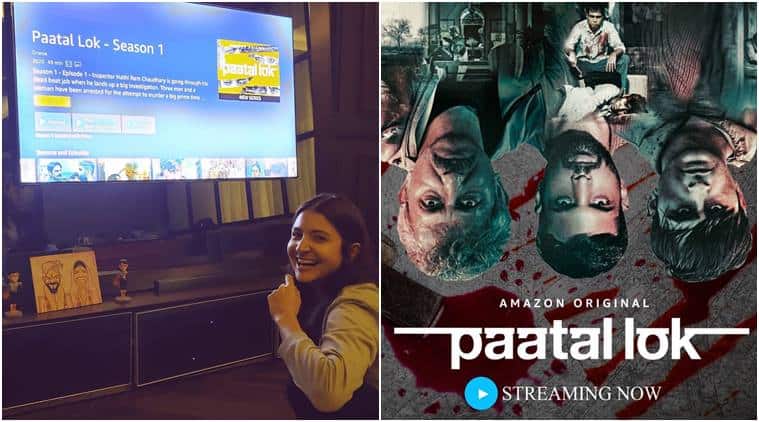 Anushka Sharma’s production venture Paatal Lok is receiving good reviews from the critics as well as the audience. On Friday, the team celebrated the success of the series over a video call. Jaideep Ahlawat, Neeraj Kabi, Abhishek Banerjee and others along with the makers of the show – Avinash Arun and Prosit Roy – joined the success party hosted by Anushka Sharma.

Sharing a picture of the digital bash, Sharma wrote, “What ‘Success party’s’ look like in these times .PAATAL LOK streaming NOW on @primevideoin !! Had a blast with this incredible team of ours.”

Paatal Lok revolves around Inspector Hathi Ram (played by Jaideep Ahlwat) who lands the case of a lifetime when four suspects are arrested on the charges of attempting to murder a prime time journalist (Neeraj Kabi).

Filmmaker Anurag Kashyap called the crime-thriller the best he has “seen to come out of this country in the longest time, maybe forever.”

The Indian Express’ critic Shubhra Gupta gave the series three and a half stars. “A bunch of characters jostle for our attention, and as the ambitious journalist who is happy to swing whichever way the wind blows, Neeraj Kabi is efficient. His anxiety-ridden wife (Mukherjee) starts off shaky, but is given more to do as it goes along. There’s an idealistic reporter (Dutt, leaving an impact) in the mix, looking for a moral centre in the murk, too. But the man of the series is, undoubtedly, Jaideep Ahlawat. His Hathi Ram Chaudhary is a man of many parts: exasperated and tender with his wife (Panag, ably supportive), an unsure father with a rebellious teenage son, and desperate to get that one case that will make him come up tops. The craggy faced-Ahlawat aces it, each line of his face denoting a life lived, making even the more unbelievable parts of this thing believable,” she wrote in her review.