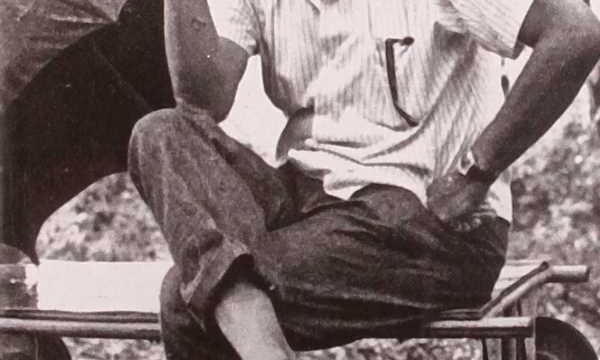 Satyajit Ray would have been a hundred years old on May 2.
To mark the legendary film-maker’s birth centenary, Rediff.com brings you a treasure trove of features from our archives.

A lot has been said and written about Satyajit Ray. Many papers have been published on him and his work both in India and abroad.

Nemai Ghosh’ book Manik-Da Memories of Satyajit Ray is yet another attempt to understand and appreciate the genius that was Satyajit Ray, the man who brought Bengali Cinema to the world stage.

Photographer Nemai Ghosh is best known for his photographs of Satyajit Ray and his stills from Ray’s films.

He is the author of Faces of Indian Art: Through the Lens of Nemai Ghosh, Satyajit Ray: A Vision of Cinema, Satyajit Ray at 70.

We present an excerpt from the book, Manik-Da Memories of Satyajit Ray. 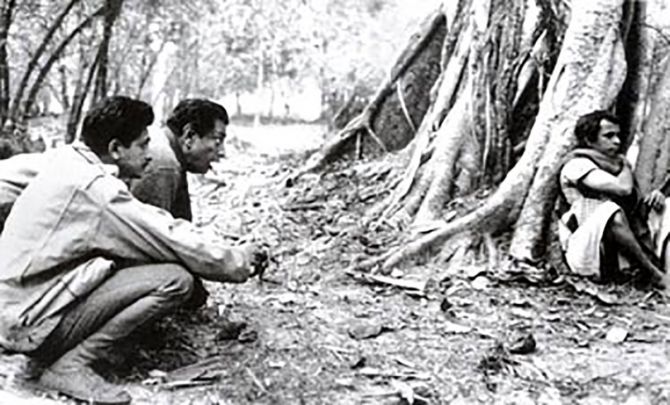 One afternoon a few days later, I dropped by at the studio at Tollygunj, Bansi-da (Bansi Chandragupta, the famed art director took the packet and said, ‘Manik, have a look at these photographs.’

While Manik-da looked at the photographs, I hid behind Bansi-da, nervously watching the six-foot-two-inch man as he attentively went through the photographs shot by an amateur like me. To say I was excited would be an understatement.

He finally spoke. ‘Who has taken these photographs?’ Bansi-da moved aside, pointed towards me and said, ‘This boy, he is Nemai, Nemai Ghosh.’

Manik-da looked at me and in his deep baritone said, ‘You have done it exactly the way I would have, man, you have got the same angles!’

I was ecstatic! I remember having gooseflesh out of sheer thrill and suspense. Much time has passed since then, but that excitement, I can still feel within me. Even today, when I write abut that incident I feel that same excitement so palpably.

Then he himself escorted me to the sets. And that was my initiation. 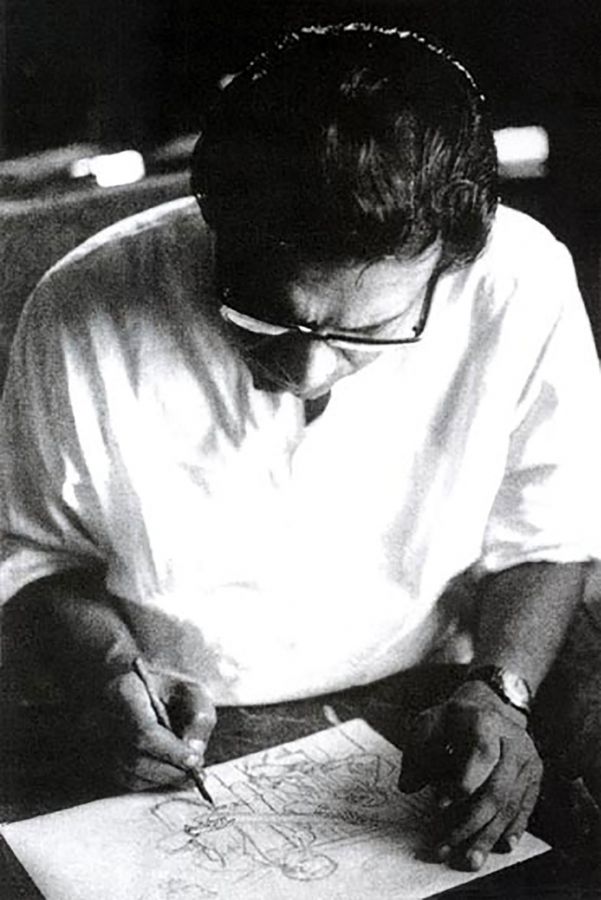 Whenever I would go to his place, I would always find him engrossed in something or other. He used to effortlessly sketch or draw pictures, or do calligraphy. Once complete, he never cared much to preserve his works. He was interested only in creation.

I told him once that I wanted to keep a copy of his different types of works.

I requested him to sketch the screenplay of a film in a particular colour so that it might be easier for me to copy it later when needed.

Such was the greatness of the man. An interesting incident took place during the next round of shooting [Aranyer Din Ratri]. It was probably the hottest day of the season. Sharmila (Tagore), the film’s heroine, was sitting in front of a window. I was standing just below the window. We were discussing my photographs.

But she did not believe that I was not a professional photographer, only an amateur who had just learnt to hold a camera.

After a lengthy debate, Sharmila finally accepted that I was indeed an amateur, but worked with professional skill and competence, and did not receive any payment for this, not did I expect any. Perhaps this was when she noticed my old camera and later sent me a tele-lens through Robi-da (Robi Ghosh, actor).

Usually, Manik-da never left the sets during lunchtime. Since I was not a member of the unit, I couldn’t accompany the others during breaks. As a result, I studied him from a distance, through my lens.

Once, I saw him standing alone and playing a dundubhi (a kettledrum).

On another occasion, I saw him lying on the floor and looking at the ceiling; at times I would see him raising his hands above his head in deep contemplation.

I noticed that a sign of his deep anxiety or serious contemplation was biting a handkerchief or the pipe.

Sometimes, he would whistle a tune, oblivious to the surroundings. 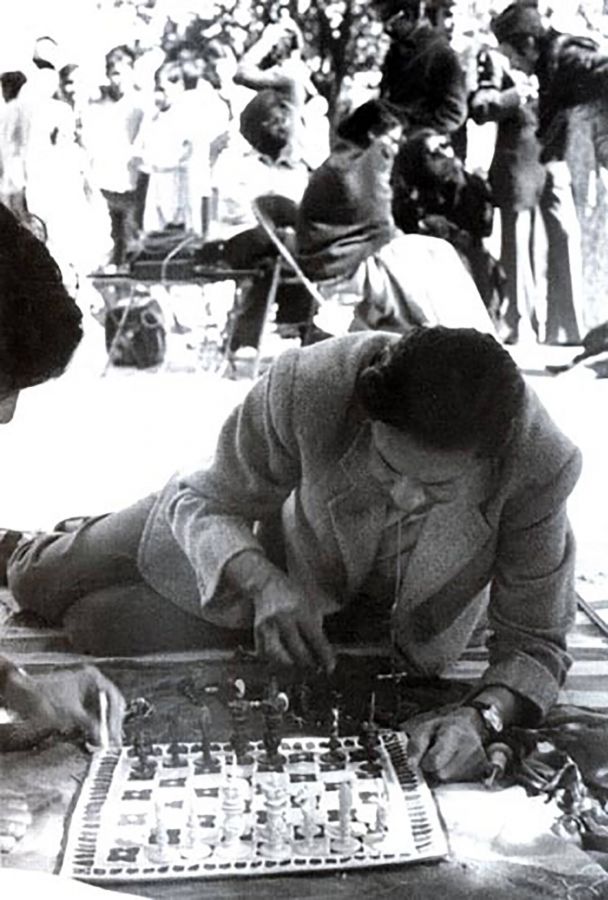 Manik-da’s first Hindi film was based on Shatranj Ke Khiladi, a famous story by Munshi Premchand. It was to be shot in colour.

The cast was full of famous actors and actresses.

I, however, was not to be part of the film as the producer had arranged for a photographer from Mumbai for the stills.

When Manik-da came to know, he said, ‘Let them do whatever they like. But only Nemai will take my stills.’

Ultimately, of course, the photographer from Mumbai could not keep pace with Manik-da and left within a week.

So I was left to do the job myself. 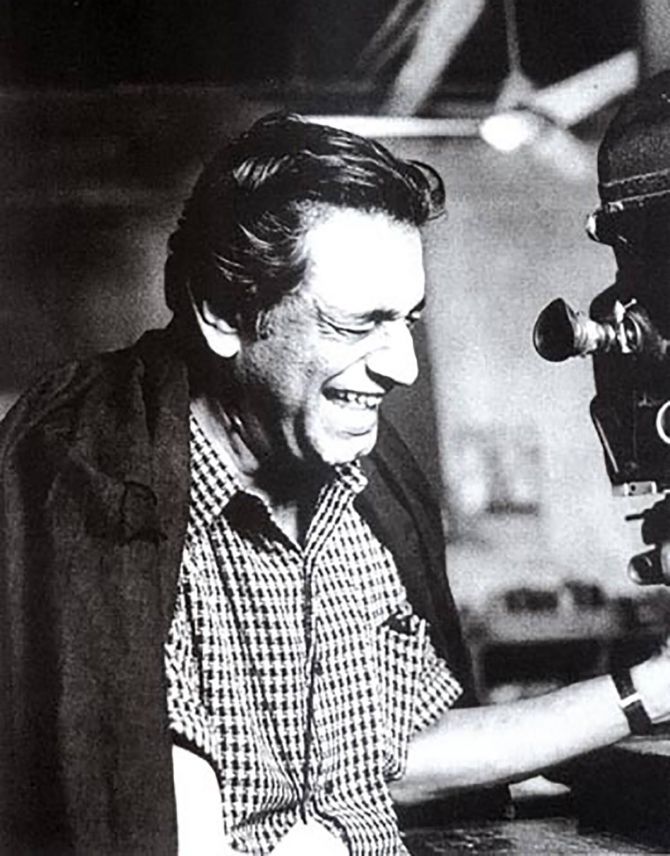 For my photographs of Manik-da which show him laughing heartily, I am deeply indebted to my actor friend Kamu Mukhopadhyay. While I would take different positions sometimes sitting, sometimes lying, or even standing at precarious angles Kamu would stand behind me and imitate my pose, making Manik-da break into a loud guffaw. Manik-da’s death remains perhaps the most devastating incident in my life. It brought to an end a chapter in my life. I had spent the best years of my life in is company. The man lives in my mind. I was shattered when I learnt he was no more. I had never dreamt of a situation where Manik-da would leave me. Even now I cannot.

I was at his doorstep on the last day.

I do not need a photograph to remind me of that moment.

Even today I can see the picture clearly in my mind’s eye.

Standing in the sun you are sure to shine in its light.

Such was Manik-da’s presence in my life.

A mere touch of his created this photographer Nemai Ghosh out of a common boy from a middle-class family. 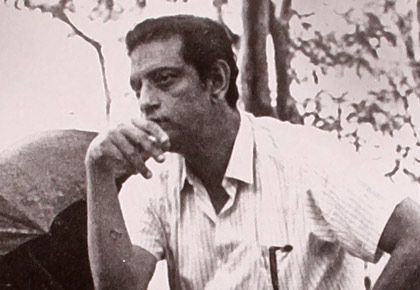