Casualty will air a violent showdown between Alicia Munroe and Eddie McAllister during this weekend’s series finale as their rape plot reaches a dramatic conclusion.

Alicia (Chelsea Halfpenny) has taken centre stage in a highly topical sexual consent story, which has seen her left traumatised after a night with Eddie.

Alicia claims that Eddie took advantage of her after going back to her house, while he claims that they had consensual sex and he did nothing wrong.

Although the pair have very different perspectives of what happened on the fateful night, the story will come to a head on Saturday (August 4) when Alicia finally decides to report Eddie to the police. 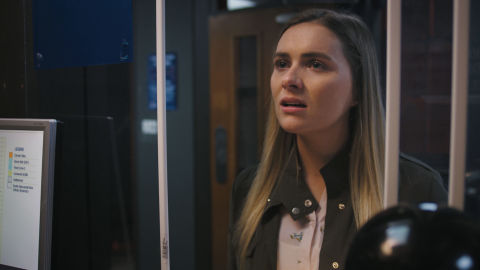 Plagued with Eddie’s voice in her head, the episode will kick off with Alicia arriving at the police station, where she reports the attack and gives a statement to the police.

When Alicia is interviewed by police officer Vic, she admits to flirting with Eddie and kissing him, but insists that she felt ill by the time she got home and did not want to have sex.

Alicia insists that Eddie was aware of this but chose to ignore her, but is thrown when she’s confronted with some shock CCTV footage that could change everything.

As Alicia fights for justice, Eddie is arrested at the hospital – but gives a very different version of events during his own police interview. 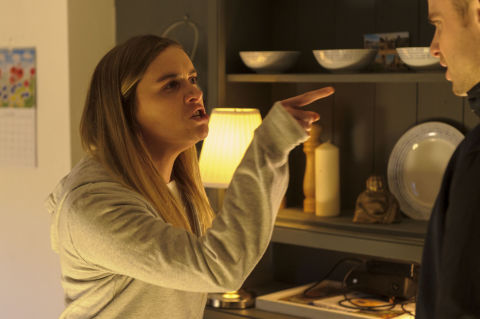 With emotions running high, a furious Eddie later breaks his bail and confronts Alicia at her house, where the truth of the fateful night is finally revealed to viewers.

However, as the pair’s confrontation turns violent, Eddie lashes out at Alicia – with devastating repercussions. Will Alicia be alright?

Casualty airs these scenes at 9pm on Saturday, August 4 on BBC One.

Rape Crisis England and Wales works towards the elimination of all forms of sexual violence and sexual misconduct. If you’ve been affected by the issues raised in this story, you can access more information on their website or by calling the National Rape Crisis Helpline on 0808 802 9999. Rape Crisis Scotland’s helpline number is 08088 01 03 02.

Readers in the US are encouraged to contact RAINN, or the National Sexual Assault Hotline on 800-656-4673.