Sexism in academic choices is a reality that’s rarely in focus in Hindi films but Director Anubhuti Kashyap examines it to great lengths in her sparkling debut chronicling a doctor’s coming-of-age.

Bhopal bloke Uday Gupta dreams of becoming an orthopaedic surgeon like his mentor (Indraneil Sengupta), a professionally dynamic albeit promiscuous embodiment of men, who make worst kind of role models.

Though Uday is quick to pooh-pooh the likes of Kabir Singh, a milder strain of toxic masculinity reveals itself in his own jealousy and complaints. Be it blaming his girlfriend for scoring a lower rank, demeaning her over the speaker phone in presence of the afore-mentioned cad or constantly judging his single mum’s lust for life.

It’s a woman’s world and men need to realise they are all the better for it — women helping women bring life into the world, single women raising young men, young women falling prey to older men, Doctor G acknowledges their patience, passion and pardon sans any frills or depth.

Its cheerfully packaged message to prejudiced minds in dire need of introspection is right up Ayushmann Khurrana’s alley.

Fewer still make up for their follies and convince they’ll do better like he does.

Expertise in his trademark genre strengthens Anubhuti’s mix of ethics and emotions.

After that unmistakable ‘jugaad lagao‘ tone in his pleas trying to procure an internship seat in any part of Madhya Pradesh — telling of how strangely scholastic ambition works in our country — fall on deaf ears, Uday settles for gynaecology as a temporary backup.

Working in the ironic sounding Stree Rog Vibhaag (Doctor G’s original title) challenges Uday’s prejudices as he travels from one end of the gender spectrum to another until he’s finally understood a doctor isn’t defined by his sex but capability and trust.

Authentic scenes of typical government hospital chaos play before our eyes as Uday juggles between his inadequacies and the groaning demands of his bloated belly clientele.

Squeamish by virtue of inexperience, his greenness shows by way of theory too.

Extra brownie points to Anubhuti for normalising a subject that’s commonly seen as awkward or turned into goldmine of innuendoes and sexual humour.

From vaginal yeast infections to foreskin and dilation, Doctor G talks shop like it should.

The practitioners look real, their body language is down pat, it’s a world that’s familiar and frantic only this time, it’s intimate too.

It’s not all work and no play.

Uday’s shirtless buddy, bearing an uncanny resemblance to Martin Scorsese in his 30s, pops in to wisecrack every now and then.

There’s much to chortle about the dispassionate receptionist deflecting all the boy begging parents-to-be while flaunting her medical savvy before rookie Uday.

His all-girl gang of seniors, led by Rakul Preet’s Dr Fatema, rag him incessantly and dub him ‘chadhava‘, yet are quick to take pity on his ‘fish out of water’ state. Not all jokes land but the mood is regularly upbeat.

Putting things in perspective is the always solemn, always right department head Dr Nandini (Shefali Shah at her authoritative best) especially when she wonders the need for making such a fuss about Uday’s first delivery.

It’s a great leveller moment that brutally bursts the sentimental bubble we all felt minutes ago while witnessing the birth of a child. And a gynaecologist.

It’s evident in Puneet Sharma’s delightfully penned Amit Trivedi songs, Idiot Aashawadi and Newton Ek Din Seb Girega, that feel as much a part of the narrative as its zinger-infused dialogue high on pop culture references of everything from Hum Dil De Chuke Sanam‘s Ajay Devgn to Avengers villain Thanos. (You may notice a fleeting hat tip to Masaan Director and Anubhuti’s colleague Neeraj Ghaywan too.)

Doctor G doesn’t shy away from dark, uncomfortable scenarios as moral dilemmas are confronted and human fallibility and complexities come to fore. Even when things get grim and problematic concerning a minor’s abortion, Anubhuti’s level-headed approach refuses to view it like some end-of-the-world melodrama.

She sure has a flair for finding delicate moments amidst bumpy developments.

Though I enjoyed Rakul’s sass and soft corner for Ayushmann, their blow hot-blow cold plot point felt a bit muddled and undecided in its intentions.

The film-maker has a wonder in Sheeba Chaddha, playing Uday’s culinary expert, companion-desiring mother with a disarming simplicity.

She’s played moms we want to tightly hug before too, but every time, she becomes a new version of this endearing personality.

She and Ayushmaan make quite a team.

The scooter rescue sequence involving the mother-son duo where the cries for a serious emergency and GPS woes are mentioned in the same breath capture the everyday drama of everyman’s life most brilliantly.

It’s feel-good yet says a lot of significance in a succinct manner, proving Anubhuti Kashyap knows both her craft and feminism. 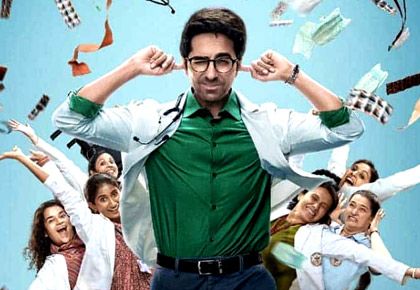