After gunning for a fight throughout the whole of today’s (July 31) hour-long Emmerdale, Graham Foster got what he wished for with a brutal fight with Joe Tate.

In tonight’s special flashback episode, fans watched Graham suffer a worrying relapse after hitting the bottle when confronted by visions of his dead wife Cheryl.

The episode revealed more about Graham’s tragic past, including the death of his wife from a drink-drive crash that he caused 10 years ago.

Enraged and consumed by guilt, Graham tried to pick a fight with Frank Clayton and even Cain Dingle before delivering several brutal – and perhaps even life-threatening – blows to Joe.

Viewers were loving the drama, praising the soap for the “amazing” episode. India Willoughby even went as far as calling it “Shakespearean”.

Not everyone was feeling the love, though, as concern for Joe took over. “Graham better not have killed Joe,” one viewer wrote, while another agreed: “Do NOT tell me Joe is dead.”

We already know thanks to spoiler pictures that Joe will survive Graham’s attack, but how will he overcome his injuries – and where will this latest downfall leave Graham?

Emmerdale airs weeknights at 7pm on ITV, with an extra episode at 8pm on Thursdays. 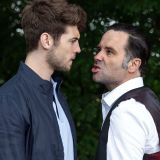